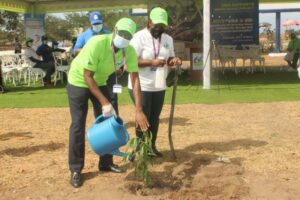 Mr Musah Abu-Juam, the Technical Director in Charge of Forestry at the Ministry of Lands and Natural Resources, says government will soon roll out a loan scheme to encourage private tree growers.

She said the initiative was to sustain the tree planting programme and that 35 people would be given $100,000 each with 10 per cent interest to establish plantations over a period, as pilot.

Mr Abu-Juam said though government targeted to plant five million trees, this month, the country planted 6.2 million hoped to increase it next year.

The project, with support from the European Union (EU) and United Nations Food and Agriculture Organisation (FAO) was on the theme “Assessing the Impact of VPA Implementation in Ghana”.

He said, “Growing trees is a business in its own but it takes a long time to grow and the banks are not ready to give loans and wait for a long time to pay so government must take leadership. We are starting with few people and a 100-year grace period to pay back.”

Mr Abu-Juam said government was going to task the banks to take full responsibility of getting back the money.

He said once that was successful, government would be encouraged to increase the number of beneficiaries.

The Technical Director noted that when done well, tree planting would be recognised as one of the most engaging, environmentally friendly activities that people could take part in to keep the forest reserves intact.

He again expressed gratitude to the diplomats, traditional authority, Parliament and the lot of Ghanaians who engaged in tree planting on the day.

The Voluntary Partnership Agreement (VPA) is a bilateral timber-trade agreement between the European Union and Ghana a timber-exporting country.

Signed in 2009, the VPA enjoins on Ghana to improve forest governance and law enforcement which aims to address illegal logging.

Under the VPA, the partner country agrees to export only legal timber products to the EU.

Can you trust Ghanaian betting companies?