Conflict has increased since the pandemic broke out – Report

June 17, 2021 Africa/International Comments Off on Conflict has increased since the pandemic broke out – Report 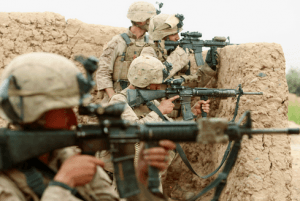 Conflict levels around the world has increased since the pandemic broke out, according to the annual Global Peace Index, published on Thursday by the Institute for Economics and Peace.

The report, that assesses the situation in 2020, shows that conflict has increased worldwide for the ninth time in 12 years.

The Institute’s Founder, Steve Killelea, said the pandemic was to blame.

Although overall levels of conflict and terrorism decreased in 2020, political instability and violent demonstrations have increased, Killelea said.

He said the economic impact of the pandemic would create further uncertainty, especially for countries that were already struggling before the pandemic.

Recovery is also likely to be highly uneven, which could risk further deepening rifts, he said.

Overall, the Global Peace Index recorded more than 5,000 violent events related to the pandemic between January 2020 and April this year.

Twenty-five countries saw a greater number of violent demonstrations, while only eight countries improved in that category.

The situation was worst in Belarus, Myanmar and Russia, where authorities clamped down violently on protesters.

Civil unrest rose sharply in the US during the period assessed, not only due to the pandemic but also partly as the Black Lives Matter movement grew, and as well as the storming of the US Capitol in Washington in January.

By contrast, the murder rate, deaths due to terrorism and the perception of crime fell significantly in numerous places worldwide, although the situation differed significantly from one area to the next.

In Afghanistan, Brazil, South Africa and Mexico, for example, more than half of the population continued to cite violence as the greatest risk to their own safety in daily life.

The report found Afghanistan the least peaceful country in the world, followed by Yemen, Syria, South Sudan and Iraq.

Iceland, on the other hand, again topped the ranking as the most peaceful country, and has held that position since 2008.

As a region, Europe is also the most peaceful, according to the index, which noted, however, that here, too, political instability has increased.

The Global Peace Index covers 99.7 per cent of the world’s population, its publishers say, and evaluates the situation using 23 qualitative and quantitative indicators grouped into three areas – ongoing conflict, security and militarization.