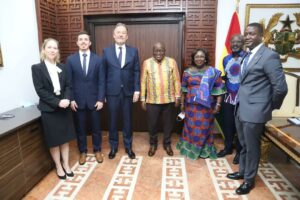 The pair are Ian Walker, High Commissioner of the United Kingdom and Ambassador Christoph Retzlaff of Germany.

At separate events at the Jubilee House Accra, President Akufo-Addo commended both envoys for their sterling performance during their tour of duty of Ghana.

He said relations between their respective countries and Ghana had grown stronger during their tenure, and hoped that they would promote strong active relations with Ghana in whichever capacity they found themselves in the future.

When he met Mr Walker, President Akufo-Addo congratulated him on his “outstanding” duty tour of the country, saying, “You’ve been an extremely successful High Commissioner and I think everybody who has had the opportunity.”

“We appreciate very much the work you have done here,” he said, noting that very important officials from the UK who had visited Ghana during his tenure, including Prince Charles and his wife and, various ministers, and most recently, the UK Home Secretary, Priti Partel.

“The energy and the concern that you brought to bear on your work here has made it clear to us that you have the best interest of our country at heart,” he said, and hoped his successor would live up to the high standards that he had set.

The President told the High Commissioner that the Ghanaian government was committed to bringing new energy and strength into developing its new trade relations with the UK.

He said the new agreement, forged between Ghana and the UK following the exit of the UK from the European Union (EU), had reinforced the bilateral and trade relations between the two nations and created a better condition for Ghana to trade effectively with the European nation.

Mr Walker said it had been a privilege to represent his country in Ghana “and to work so well with the institutions and Government of Ghana” and was appreciative of the support he got from government and the people throughout duty tour.

He stressed that he looked forward to building a stronger future between Ghana and UK, saying, “Although I leave after four years, I will remain committed to seeing that relations between our two nations waxes stronger.”

The outgoing German Ambassador, Christoph Retzlaff, thanked the President for the trust and support extended to him and the mission over the years.

He said it had been an honour to serve in Ghana as the German envoy for the last five tears.

Mr Retzlaf said relations between Germany and Ghana which had always been strong over the last decade and dating back to the years of independence, had become more robust during President Akufo-Addo’s time in office.

With the visits of Germany’s Federal President and Chancelor Angela Merkel and the launch of other state-of-the-art projects across Ghana, including the siting of the Volkswagen Plant in the country, the outgoing envoy told the President that, “I think it is fair to say that during your time in office in the last five years, the relations between our countries have even become stronger.”

“I would like to thank you for your commitment to the Ghana-German partnership and I am happy to say that I was able to commit to the strengthening of these relations,” Retzlaf said.