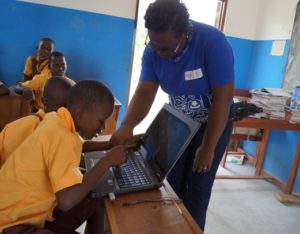 Despite the country’s progress in improving its technological advancements, there are still challenges that prevent thousands of students from fully getting access to facilities needed to learn Information and Communication Technology (ICT).

As introduced in our primary education, ICT has served as the first ladder to making students and citizens more adaptable to the growing rate of technology. The deployment of ICT and its tools have contributed to effective learning by expanding, promoting, managing assets of institutions, and improving the quality of education received in schools.

In the quest to enrich the educational system and level of ICT being taught in schools, introducing programming at the basic education level will enhance children’s thinking capacity and creativity as they grow.

Programming can be defined as a language that gives instructions to a computer to get something done. Just like every language, it follows a particular form of communication known as syntax to communicate with every computer. The idea for introducing programming isn’t to create a large pool of app developers but to develop students who are creative, critical thinkers and have an intelligent relationship with technology and the world wide web.

Many developed countries have implemented the K-12 Computer Science framework designed to make students comfortable with coding and basic computer science concepts. An example is England where children between the ages of 5 and 16 are taught some form of programming language. Finland for instance in 2016, introduced a course of study in computer programming that became part of the country’s core syllabus.

For beginners, the starting point wouldn’t be to introduce them to high-level languages like Java, C++, Python, etc. The idea is to ease the children into developing the necessary skills for coding like logic which has some benefits in courses like Mathematics.

Research has shown that in countries that have been able to implement basic programming languages like “Scratch” into their educational system, the coding skills developed have allowed students to develop their problem-solving skills and enhance creativity in those who learn how to code.

Benefits of introducing programming at a young age include

Is it time to do so?