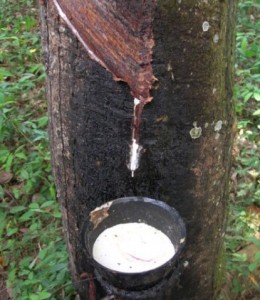 The Kumasi Metropolitan Assembly (KMA) is working with soil scientists at the Forestry Commission (FC) on the feasibility of cultivating rubber in the metropolis.

In pursuance of this idea, the soil scientists had already taken samples of varied soil types from different areas within Ghana’s second-largest city and experimenting with them.

“The Assembly is looking forward to assisting smallholder farmers to plant rubber to generate income for their livelihood if we should achieve our objectives,” Mr Osei Assibey-Antwi, the Metropolitan Chief Executive (MCE), said.

The MCE, in an interview with the Ghana News Agency (GNA) in Kumasi, on the sidelines of the official take-off of the Green Ghana Project, said rubber had varied economic benefits and attracted high demand on the international market.

The MCE said the venture, when implemented, would add up to the sustainable growth of the local economy, saying raw materials from the rubber plantation could be utilized for industrial purposes.

The rubber tree, originally from the Amazon Forest, was introduced to Ghana in the late 1800s in the Aburi Botanic Gardens in the Eastern Region.

Soil scientists say the average temperature required for rubber plantation is 25-34 Degree Celsius, and the soil for rubber cultivation has to be deep and well-drained.

Acidic soil, which is lateritic loam or clayey loam, is best suited for these trees, according to research.

Mr Assibey-Antwi highlighted the essence of the Green Ghana Project and rallied the citizenry to show a keen interest in the noble initiative as it was meant to recover Ghana’s lost forest cover.

“The devastating effect of the changing climatic conditions is catching up with us as a people,” he told the GNA and advised landlords and property owners to make it a policy of planting at least a tree at their backyards.

“We need as many trees as possible to absorb the carbon in the atmosphere to overcome the dangers relating to climate change,” he noted.

The MCE said more than 33, 000 varied tree seedlings, ranging from mahogany, coconut to royal palm, were being planted under the Project.

Mr Assibey-Antwi, who had since assumption of office won many laurels for some novelty environmental initiatives such as the ‘Keep Kumasi Clean Green’ Project, hinted that more than 500, 000 tree seedlings were distributed to the residents for planting over the last four years.

“The demand for the seedlings keeps growing, therefore, the KMA is liaising with the Forestry Commission to nurse more tree species for distribution to the people,” he said.

The official take-off of the Green Ghana Project was symbolically held at the State Experimental Basic School in Kumasi, a European Union (EU)-designated Forest Zone, where 120 trees were planted.

Mr Benito Owusu-Bio, Deputy Minister-designate for Lands and Natural Resources, who was the Special Guest of Honour, planted a symbolic tree to commence the Project.

In a brief message, he assured of the Government’s resolve to improving Ghana’s ecosystem, adding that five million tree seedlings were expected to be planted under the Project.