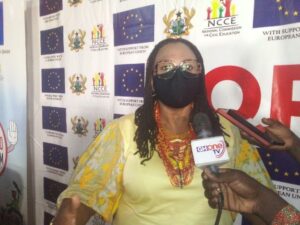 The National Commission for Civic Education (NCCE) has launched a research report on violent extremism in ten border regions of Ghana which identifies youth unemployment as a risk to national security.

The research, titled: Risk or threat Analysis of Violent Extremism in Ten Border Regions of Ghana, conducted by the National Commission for Civic Education with support from the European Union, seeks to investigate citizens’ understanding of violent extremism and other forms of violence and their appreciation of risk factors for exposure to the menace.

Ms Josephine Nkrumah, Chairperson of NCCE, in a welcoming address at a National Dialogue on violent extremism organised by the Commission in Accra, said Ghana was not immune to violent extremism and that it was a threat to national security.

‘‘ Unemployment is one of the key drivers of vigilantism, it is not only the unemployed youth who are vulnerable but others who may be living in privileged settings because different people affiliate to violent extremism for different reasons and burden to national security,’’ she said.

The Chairperson said the issue should be addressed and tackled as a matter of urgency in stemming the tide of the violent extremism finding roots in the country.

In recent times, she said, Ghana had witnessed emerging trends of electoral violence and the use of arms by political thugs-vigilantes thereby threatening Ghana’s economic growth, political stability and democratic development.

Adding that, the country’s national unity and cohesion was equally threatened by the Secessionist movement from the Western Togoland.

Ms Nkrumah called for the acceleration the agenda of reducing youth employment and ensure that people were economically empowered as the needed environment for job creation and growing skills was created.

She said the growing insecurity in the West African sub region’s landscape and particularly religious fundamentalists operating in the Sahel region and along the Northern most borders of Ghana had diverse implications for our country’s peace, stability and sustainable development.

He said it had become a real and serious threat for countries such as Ghana which was seeking new partnership in enhancement of the effectiveness of the risks and of terrorism and violence.

He said civic education, sensitisation and awareness creation campaigns on violence were essential however, it could not be effectively performed without conducting a fully flexed analysis on the situation on the ground.

Mr Spordaryk assured the NCCE of the EU’s continuous support to sustain peace in Ghana.

Ms Henrietta Asante-Sarpong, Director of Research, Gender and Equality, NCCE, said the objectives of the study were to investigate the prevalence and knowledge of violent extremism in the study areas, examine existing institutional responses to the threat and explore the expected role of the Commission in collaborating with communities and local partners to prevent it in Ghana.

She said the data was collected in March, 2021 and information was gathered from 1,173 Ghanaians from 71 selected districts in 10 sampled border regions of Ghana, with 42 key informant interviews.

She said the findings showed that chieftaincy and land disputes as well as ethnic conflicts were reported as forms of violence prominent in the regions, and that participants from the Volta, Northern, Upper East and West Regions were more likely to be aware of violent extremist activities.

According to Madam Asante- Sarpong, with regards to the security situation at the country’s border regions and how it exposed the country to the threat of violent extremism, 42.5 percent of respondents reported that it was very easy for foreigners from neighbouring countries to enter the country, making security at the borders porous.

Fifty eight per cent ascribed the reason for their engagement in acts of violence to demand for their rights while 2.4 percent did so to put fear in people.

It was recommended that NCCE should intensify public education on the causes and effects of violence and violence extremism.

It was also recommended that Government should resource the security agencies to strengthen surveillance at the borders and within the communities while empowering law enforcement institutions to enforce laws on violence in the district, and citizens found culpable punished by law without discrimination.

The report recommended that Government should provide sustainable jobs and employable skills for the youth.

It also recommended that citizens should adhere to the rule of law and ensure peace at all times and parties in conflict should be encouraged to solve their differences through effective dialogue.

The report recommended that traditional and religious leaders and the media should educate the public on the dangers of violence extremism.

Dr Festus Kofi Aubyn, Regional Coordinator, Research and Capacity Building, West Africa Network for Peace Building (WANEP), said citizens should consolidate and build on the resilience the country had that had prevented violent extremism as opposed to other countries.

He said the fight against violent extremism was collective and all citizens had roles to play in order for peace to exist.