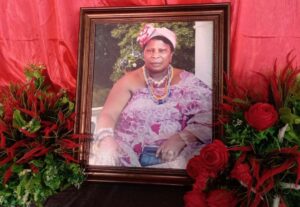 The late Mamaga Dewotornyo, who reigned for 50 years, hailed from the Asamani and Kadrake Royal families and was as well the Queen mother of Hohoe and the Torkorni Royal clan.

“Mamaga Dewotornyo during her 50 years reign was able to initiate a lot of projects to enhance the image of Queen mothers in the Municipality,” he said.

The Divisional Chief said the late Mamaga established and institutionalised the Hohoe Municipal Council of Queenmothers.

She was the President of the Council and also a member of the Volta Regional Paramount Queenmothers Association until her demise.

The Divisional Chief said “with age, Mamaga started showing signs of ill health. Most often, she regained her strength and continued to perform her duties as the Paramount Queenmother of Gbi Traditional Area.”

He said the late Mamaga became ill again in early 2019 and all efforts made to have Mamaga regain her health eluded them.

Togbe Adzofuwusu called on people in the traditional area to go about their daily activities with sobriety during the period of mourning.

The Traditional Council has opened a book of condolence to the general public in memory of the late Paramount Queenmother.

Flags will fly at half-mast in the traditional area with indigenes of the Gbi land and sympathisers observing the mourning period in red and black attires.

The Traditional Council has also chosen from July 15 to July 18, 2021, for the funeral arrangements of Mamaga Dewotornyo.

Currency stability was helpful in time of COVID-19 – Adu-Boahen