May 25, 2021 Africa/International Comments Off on African Court marks 15th anniversary 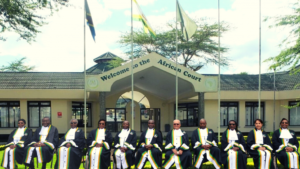 The African Court on Human and Peoples’ Rights marks the 15th anniversary milestone of the operationalization since it was set up by the African Union to monitor human rights violations in the continent.

Dr Robert Eno, the African Court Registrar told the Ghana News Agency that as the continental body recounted that up to date, only six of the 31 State Parties to the Protocol had deposited the declaration recognizing the competence of the Court to receive cases directly from NGOs and individuals.

The six States are: Ghana, Burkina Faso, The Gambia, Mali, Malawi and Tunisia.

He said the Protocol was adopted by Member States of the then Organization of African Unity (OAU) in Ouagadougou, Burkina Faso, in June 1998. The Protocol came into force on January 24, 2004.

African Court Registrar noted that the Court’s Contentious Jurisdiction applies to all cases and disputes submitted to it in respect of the interpretation and application of the African Charter on Human and Peoples’ Rights, (the Charter), the Protocol and any other relevant human rights instrument ratified by the States concerned.

For its Advisory Jurisdiction, he said the African Court may, at the request of a Member State of the African Union (AU), the AU, any of its organs or any African organisation recognised by the AU, give an opinion on any other legal matter relating to the Charter.

It also covers any other relevant human rights instruments, provided that the subject matter of the opinion is not related to a matter being examined by the Commission.

He said the African Court officially started its operations in Addis Ababa, Ethiopia in November 2006.

In August 2007 it moved to its seat in Arusha, in Tanzania.

Between 2006 and 2008, the Court dealt principally with operational and administrative issues, including; developing of the structure of the Court’s Registry, preparing its budget and drafting of its Interim Rules of Procedure.

In 2008, during the Court’s Ninth Ordinary Session, the Court adopted the Interim Rules of Court, pending consultation with the African Commission on Human and Peoples’ Rights, with a view to harmonizing their rules.

He said the harmonization process was completed in April 2010, and in June 2010, and during its 58th Ordinary Session, it adopted new Rules which came into force on September 25, 2020.

He said the African Court may receive cases filed by the African Commission of Human and Peoples’ Rights, State Parties to the Protocol or African Intergovernmental Organizations.

Non-Governmental Organizations with observer status with the African Commission and individuals can file cases directly at the Court as long as the State that they are suing has deposited the Article 34(6) declaration recognizing the jurisdiction of the Court to accept cases from individuals and NGOs.

He expressed concern that, Rwanda withdrew its declaration in 2017; Tanzania in 2019; Côte d’Ivoire and Benin in 2020.