May 14, 2021 Editorials/Opinion, Lead Story Comments Off on The foul treatment of Caleb and Zoe is a typical state attack on press freedom

The news of the arrest of Caleb Kudah and Zoe Abu-Baidoo of Citi FM this week, and the subsequent barbaric treatment of Caleb by operatives of national security isn’t a mere misconduct, it is how the state operates, especially to cow critical journalists and to suppress press freedom.

The records show that agents of the state have consistently, abused journalists in order to silence them, and often the brutish conducts applied are flagrant abuse of the law and indeed, the service rules of such agencies.

There is a long list of assault of journalists by state security officers, but there is almost no record, that readily comes to mind, of anyone sanctioned for the act, apart from one case where Multimedia Ghana Ltd, sued the IGP for assault on its reporters.

While some of these victims of state assault, have been scarred for life, these agents of the state have continued to live their lives and some have moved up in rank.

It should be made clear that, these individuals in the state security system who constantly attack journalists, some of them in public, aren’t chosen and positioned by mistake. They are carefully and purposely chosen to execute a certain mandate and pursue an agenda – chief among them, to instill the ‘fear of God’ in people considered loud mouths and those considered to be ‘against the government’.

As recounted by Caleb, the comments of some of the men, including some in uniform who assaulted him show that they had intentions to punish him for attempting to throw light on something they were trying to hide. Some of the comments also showed that they were unhappy that what Caleb was going to report on, would not be good for the government. It is instructive that DSP Samuel Kojo Azugu, who was a significant officer under whose watch armed men attacked and brutalised citizens during a bye-election at Ayawaso-Wuogon in 2019 and was asked to be reassigned by the Emile Short Commission that sat on the matter of electoral violence, is till at post and was present when Caleb was being brutalised.

Following the chilling revelations by Caleb of the nasty treatment he was subjected to, and of course, the scenes captured on CCTV, which are all indications of premeditated actions or what the officers consider ‘normal’ ways of carrying out their duties – which also give a sense that the operatives were acting with the full knowledge that they were operating according to the expectations and full blessings of the appointing authorities, and as the statement from the Ministry of National Security would show. The statement did not mention the awful treatment Caleb was subjected to, the statement also contained untruths about invitations to Zoe to report at the facility, when in actual fact an operative who had seized Caleb’s phone and forced him under torture to give out his password, had chatted Zoe, pretending to be Caleb and tried to lure her out, so she could be kidnapped!

As to whether Caleb had broken any law, doesn’t even arise, because even if he did, the conduct of the national security operatives in a constitutional democracy is unacceptable and condemnable by decent people everywhere. No citizen, irrespective of their offences, should be treated in that bestial manner – not so in a progressive country like Ghana in 2021.

The fervour with which the men stormed the premises of Citi FM to ‘arrest’ Zoe, wielding guns in a frenzy is to tell the media house and all journalists that ‘you are not above the law’, because ‘we are the law’. They acted in that manner because there won’t be any consequences.

Ghana has a reputation as Africa’s shining example of democracy. The country’s constitution might not be perfect, but it’s all we have and it has profusely laid out what freedoms and responsibilities we all must enjoy – the government and the governed. But the unrelenting abuse of journalists, is a slap in the face of the supreme law of the country which upholds the rights and dignity of all citizens – both high and low.

It is common to hear security officers such as members of the police and military retort when they are dealing with journalists thus ‘you are a journalist and so what?’

The role and importance of journalists cannot be overemphasized. They are an extremely important part of the democratic process and more importantly, the 1992 Constitution has elaborately cemented their place in the scheme of governance as the ones to hold the powerful to account, of course on behalf of the citizens.

The statement from the Ministry which has been poopooed by some other Ghanaians, because of the belief that it is not truthful to the facts and it’s a cover up to let the matter of holding the torturers to account slip by is an example of a long list of similar poorly written statements in such matters that eventually led nowhere.

It is the firm belief of Ghana Business News, that there is an orchestrated attempt to silence critical journalism and journalists through so many means, among them the use of such barbaric treatment as has been meted out to Caleb.

The state has, in this repugnant example, the opportunity to redeem itself, by fishing out the perpetrators, who have clearly violated Caleb, Zoe and Citi FM and the constitution and making them face the law.

It should be noted, that journalism is not a crime, and no journalist should be subjected to any form of arrest, torture or incarceration while they perform their work.

Facebook Twitter WhatsApp LinkedIn
2021-05-14
emmakd
Previous Asantehene calls for the ban use of mercury in small-scale mining
Next #FixTheCountryNow: Where is Ghana heading? 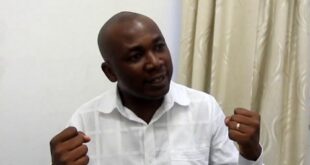