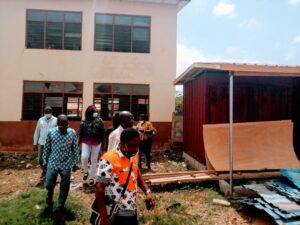 Criminals masquerading as land guards have invaded some schools in the Kpone-Katamanso Municipality impeding effective teaching and learning as well as associated security risk for both teachers and pupils in the area.

To compound the plight of the pupils and teachers, some traders have also turn parts of the schools into a market, while some churches have also joined the invasion as they use some of the classrooms for religious activities, making the schools unconducive for academic purposes.

Mr. Jerry Adjorlolo, Assembly Member for the Sraha Electoral Area in Zenu told the Ghana News Agency in an interview after the tour that, there was concern about the activities of traders who have invaded the Zenu Cluster of schools.

He said stakeholders were working with the Municipal Assembly to eject the traders from the school compound.

According to the Assembly member some people took advantage of the situation and erected containers around the schools for their private businesses.

Mr. Adjorlolo further revealed that other developers had also encroached and built their properties around the school.

He said the noise from the traders always interrupt teaching and learning in the schools, adding that, both teachers and pupils were at risk as motorists and others often invades the schools compound indiscriminately without paying attention to class hours.

The GNA observed during the inspection that some portions of the land allocated to the municipality for educational purposes in Kpone has been taken over by churches.

Meanwhile the compound of the Appolonia Junior High school have also been turned into a taxi rank, whilst the entrance of the Kubekro KKMA schools have been taken over by land guards as they lease portions of the land to unsuspecting individuals to erect stores.