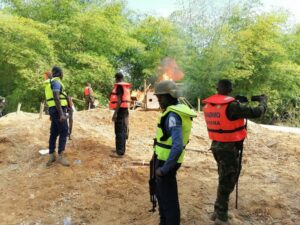 Ghana Armed Forces on Friday deployed 400 soldiers of all ranks to begin the second phase of ‘Operation Halt’ to rid the country’s water bodies of illegal miners.

The operation is aimed at removing all persons and logistics involved in mining on the water bodies.

In a statement signed and issued by Information Minister Kojo Oppong Nkrumah in Accra on Friday, said the second phase of the exercise would focus on the tributaries of Pra River, which were significantly affected by the activities of illegal miners.

The military, the statement said, had also began armed patrols of the Pra River itself and advised the public to stay away from mining in rivers, in order to avoid any action from the soldiers.

President Nana Addo Dankwa Akufo-Addo on Wednesday, April 28 authorised the Ghana Armed Forces to commence an operation to remove all persons and logistics involved in mining from Ghana’s water bodies.

The endeavour was in furtherance of the resolutions of the final communiqué issued at the end of the two-day National Consultative Dialogue on Small-Scale Mining held from April 14 to 15.

The operation was aimed at ensuring that mining on the water bodies was stopped.