May 7, 2021 General News Comments Off on Scrap dealers urged to take waste batteries to e-waste collectors 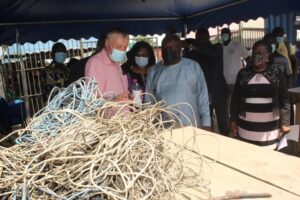 Dr Kwaku Afriyie, the Minister of Environment, Science, Technology and Innovation has urged the public not to throw away their used batteries, but hand them over to e-waste collectors to be recycled.

Dr Afriyie said government was committed to ensuring environmentally sound management of e-waste including the management of batteries and called for all to get involved.

The Minister said this on Thursday when he paid a working visit to the e-waste project site at Agblogloshie in Accra.

The government on November 5, 2020, launched the implementation of the Incentive Payment System (IPS) as part of the project, “Recycling and Disposal of Waste Electrical and Electronic Equipment in an Environmentally Sound Way.”

The IPS offers the opportunity for scrap dealers to bring all types of e-waste to the project site at Agbogloshie for a price instead of burning them which posed health risks to human life.

In addition to the IPS, the Technical Cooperation component of the support, from the German Development Cooperation, which is implemented by GIZ, is assisting in the form of capacity building at the Technical Training Center of E-waste to equip informal sector collectors with the appropriate skills to manage e-waste and batteries.

He said the existing practice of recycling and disposing of E-waste was dominated by the informal sector and that government since 2016 had put in efforts to curb the growing concerns in the sector.

Dr Afriyie cited the passage of the Hazardous and Electronic Waste Control and Management Act (Act 917) and Legislative Instrument (LI 2250) as part of the government’s efforts to deal with the E-waste menace.

The Minister said since the collection started on June 30, 2020, over 21 tonnes of waste cables were purchased and that the focus now was the collection of waste mixed batteries of all types excluding used lead-acid batteries.

He said waste from mixed batteries was among the most polluting items that harm not only the environment, plants, and aquatic life but human lives as well.

“Some of the harmful effects of improper dumping of batteries include the release of harmful metals such as mercury, lead and cadmium into the environment causing soil contamination and water pollution, which endangers wildlife and also hazardous to humans”, he said.

With over 5 million metric tons of Lithium-ion batteries in the world expected to come to their end of life by 2030, he said there was the need to make adequate preparation to handle their end of life in an environmentally sound way.

Dr Afriyie announced that government was committed to bringing on board the two additional e-waste types-Cathode Ray Tubes and Thermoplastics by the end of the year.

Mr Andreas Ahrenbog, E-Waste Team Leader, said scrap dealers were taught how to dismantle e-waste materials without burning, separate plastics from cables without burning, adding that, the second phase of the project would see the construction of an e-waste holding centre.

He said the project was to strengthen small scale recyclers through capacity building on an individual and institutional level, as well as, reduce the risks associated with the business by implementing best practices for collection and dismantling.