The Minister of Lands and Natural Resources, Samuel Abu Jinapor, on Friday, tasked the Minerals and Forestry Commissions to publish the list of 105 mining companies holding prospecting and reconnaissance licences in forest reserves on Friday May 7, 2021.

The action, he explained, would ensure the “highest standard of transparency” in the issuance of licences for mining in the forest reserves.

The Minister explained that the laws of Ghana permitted mining in forest reserves, but should be done in accordance with the Minerals and Mining Act 703 and those mining should have mineral rights.

Mr Jinapor stated this at the Minister’s media briefing in Accra, on Friday.

The event was organised by the Ministry of Information, to update the public about a recent operation by the Ghana Armed Forces to flush out persons and logistics involved in mining in water bodies.

On April 21, 2021, the Minister of Lands and Natural Resources issued a statement, which was published on April 23, asking all persons and companies, with or without legal authorisation, engaging in prospecting and/or reconnaissance activities in forest reserves to stop, until further notice.

The directive gave them till April 30, 2021, which is today, to evacuate their equipment from the site and give them up.

The Minister indicated that the President had designated forest reserves and water bodies as “Red Zones” intended to sanitising the environment and ensure the water bodies were clean.

The Minister further announced that the Ministry had constituted a Monitoring and Evaluation Desk to ensure the enforcement of the government’s measures.

He said “People can also report persons involved in illegal mining to the Desk at the Ministry for prompt action”.

Mr Jinapor said government was not against mining, but interested in ensuring that operators were properly licensed and conducted their operations without destroying the environment.

On his part, the Minister of Defence,  Mr Dominic Nitiwul, warned anyone who would go back to mine on the water bodies after the recent military operation would have himself or a herself to blame.

The task of the soldiers was to take action against anyone who would be caught flouting the directives and prosecuted accordingly. 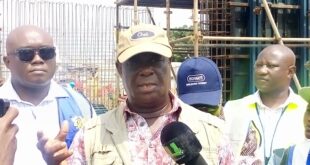