Government is concerned about ‘unbearable’ traffic on Motorway – Minister

April 29, 2021 General News Comments Off on Government is concerned about ‘unbearable’ traffic on Motorway – Minister 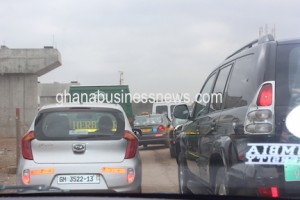 Mr Kwasi Amoako-Atta, Minister of Roads and Highways says government is concerned over the continuous traffic witnessed on some parts of the Tema Motorway.

He has, therefore, directed contractors working on the Tema-Aflao road project to initiate measures to reduce the traffic on the stretch to alleviate plight of commuters.

The Minister, who was speaking with the contractors during a working visit to the site on Tuesday, said government was concerned and worried about the continuous traffic congestion on the stretch, particularly at Kpone barrier intersection, describing the situation as “unbearable” and “unacceptable.”

“The traffic on this road is unbearable, people are suffering, it is unacceptable and it must be resolved as quickly as practicable,” he said, adding that: “I want to see something done now to reduce the traffic congestion because the traffic situation is hectic. I want the immediate solution.

“Even if you have to do something outside your schedule, as a construction firm you have your own plans, your scheme of work, nobody can disrupt your work because you have your own programme, but I want to charge you that government is really concerned and worried over the situation,” he said.

On October 25, 2020, President Nana Addo Dankwa Akufo-Addo cut the sod for the construction of phase one of the Tema-Aflao road, in fulfilment of a pledge he made when he commissioned the Tema Interchange project.

The project is part of the 170 kilometres Trans-African Highway Project, from Lagos to Abidjan, with the current two-lane dual carriageway being expanded into a three-lane carriageway in each direction.

It will provide uninterrupted traffic flows to other parts of the region and subsequently facilitate trade and transit in the West African sub-Region.

It also involves the construction of four new interchanges on the stretch to complement the Motorway roundabout interchange to facilitate traffic flow, to alleviate the plight of motorists traversing the Tema-Aflao stretch.

The £80.3 million project under the Export-Credit Finance is being funded by the UK government at competitive interest rates and favourable terms and supported by commercial banks, including; Absa in Ghana.

It is being executed by British construction firm, BHM Construction International.

Mr Amoako-Atta assured the contractors of government’s readiness to support them to deal with the situation.

“Whatever government has to do, even if during your interim you need to widen the road, my engineers are there to assist you. If immediately you have to start widening the road, government will support you,” he assured.

As part of the tour, the Minister also visited some community roads at Ashongman Estate in the Ga East Municipality and Amrahia Zongo in the Adentan Munciipality.