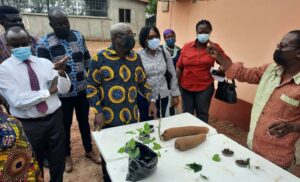 Dr Kwaku Afriyie, Minister for Environment, Science, Technology and Innovation, has assured the scientific community of ensuring that government allocates one per cent of the country’s Gross Domestic Product (GDP) to fund research and development.

He underscored the critical role of science in propelling the global economy hence his commitment to make a case for government to increase funding for research and development.

Dr Afriyie gave the assurance when he visited the Council for Scientific and Industrial Research – Savanna Agricultural Research Institute (CSIR-SARI) at Nyankpala in the Northern Region to familiarise himself with the operations of the research facility.

CSIR-SARI is a leading research institution in the West Africa sub-region, which undertakes researches in the areas of cereals, and legumes amongst other agricultural technologies.

Cabinet has decided that one per cent of the country’s GDP should be reserved for research and development but this has not been achieved over the years.

The GNA understands that most of the research projects are funded by the country’s donor partners.

Dr Afriyie said, “I will hold my own government accountable to the commitment so that I will get the economists to do the analysis. How much money has gone this year into research and development, and if it falls short, then I bring it to the attention of the President and Cabinet.”

Dr Afriyie urged CSIR-SARI to commercialise its activities by ensuring that its research projects responded to the needs of society, which would ensure that they were patronised.

He also urged CSIR-SARI to market its technologies so people would know the great works being done at the facility to help propel the development of the country.

He also spoke about the state of CSIR-SARI’s equipment and infrastructure, saying most of them were supplied by donor partners whilst some had become obsolete, and gave assurance that efforts would be made to reequip the Institute.

Professor Victor Kwame Agyeman, Director-General of CSIR, said CSIR-SARI played a critical role in improving agricultural production in the country and appealed for more funds to support its works.