Home / General News / Sekondi-Takoradi to have a dual carriage road

Sekondi-Takoradi to have a dual carriage road

April 23, 2021 General News Comments Off on Sekondi-Takoradi to have a dual carriage road 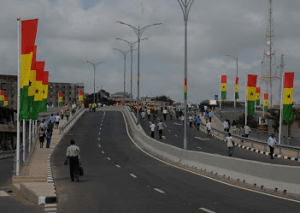 Mr Abdul Mumin Issah, the Metropolitan Chief Executive (MCE)of the Sekondi-Takoradi Assembly (STMA) says geotechnical investigations are underway to determine the strength of pavement structures of roads in the implementation of the proposed dual carriage in the Metropolis.

Already, traffic studies have been carried out to determine the vehicular numbers classification and that contractors have also established survey pegs to determine the road space that would be used.

Mr Issah told the Ghana News Agency that the design of the dualization was almost completed and the consultant would engage the public soon mentioning that a possible road diversion through New Takoradi along the railway line that merged at the Effia-Nkwanta Regional Hospital was also being considered.

The MCE therefore called on the public to desist from encroaching the “corridors of the road” because they would not be entitled to any compensation should their structures be demolished for the construction of the road.

“Unless you are a legitimate land owner…you will not be paid anything should demolition for construction begin”.

The Municipal Chief Executive, explained that the main cause of the traffic in the Metropolis was as a result of vehicles that diverted to Kojokromrom market and those from Twaabewu that linked the main road, “so the Assembly has decided to construct the community road that links Kojokrom market to Ketan to ease the traffic.”

The Shama District Assembly, according to Him, had also decided to relocate the Inchaban Police barrier to ease traffic.

The MCE said, the Assembly was trusting central government to beef up the assembly’s resources for the dual carriage road construction to reduce the traffic situation in the Metropolis.