The nominations, including eight females, which have been sent to Parliament for vetting and approval, bring to a total of 86, the number of appointees who will be serving in his second administration as ministers, regional ministers and deputy ministers.

All the nominees, except six, are all sitting members of Parliament. About eleven of the nominees retained their deputy ministerial status even though some had their portfolios changed.

Mr Charles Adu-Boahene, previously a deputy minister, has been elevated to the status of a minister of State at the Ministry of Finance.

Abena Osei-Asare, John Ampontuah Kumah have been nominated for the Finance ministry, whilst the trio of Nana Dokua Asiamah Adjei, Micheal Okyere Baafi and Herbert Krapa go to the Trade and Industry ministry.

Thomas Mbomba and Kwaku Apratwum-Sarpong have been designated for the Foreign Affairs and Regional Integration ministry, whilst Alfred Tuah Yeboah and Ms. Diana Asonaba Dapaah head for the Office of the Attorney General and Ministry of Justice.

Mr Yaw Frimpong Addo and Mohammed Hardi Tufereu go to the Ministry for Food and Agriculture. Madam Gifty Twum-Ampofo and Mr John Ntim Fordjuor have been nominated for the Education Ministry.

The President has also nominated the duo of Mahama Asei Seini and Tina Gifty Mensah for the Health Ministry, and penciled Messrs. Benito Owusu Bio and George Mireku Duker for the Lands and Natural Resources Ministry.

Madam Mavis Nkansah-Boadu and Stephen Pambin Jalulah have been nominated for Roads and Highways, whilst Hassan Tampuli and Frederick Obeng Adom go to the Transport Ministry.

Mr Kofi Amankwah-Manu goes to the Defence Ministry, and Naana Eyiah Quansah has been nominated for the Interior Ministry. 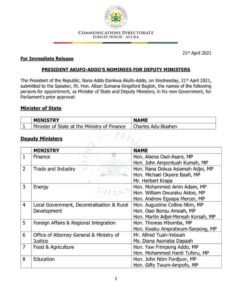 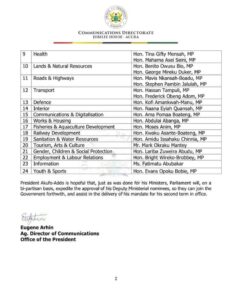