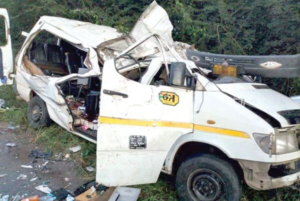 The Volta Region has recorded 137 road crashes between January and March this year, according to statistics from the Motor Traffic and Transport Department (MTTD) of the Volta Regional Police Command.

The crashes involved 223 vehicles of which 62 were commercial, 70 private as well as 91 motorcycles.

The Region lost 40 lives, five females and 35 males, through the crashes.

A total of 149 injuries were also recorded with 66 and 24 caused by commercial and private vehicles respectively while 59 were by motorcycles.

There were 31 pedestrian knockdowns within the three months to March out of which 22 were injured and with nine casualties.

The Commander called for effective collaboration between stakeholders to sensitise road users to ensure sanity on the road to save lives.

Chief Supt. Delaporte implored drivers and other road users to be conscious on the road to reduce accidents.

He advised drivers to pay attention to the physical nature of the roads, including curves and slopes as some of these contributed to accidents.

Court orders arrest of four for failing to appear before it