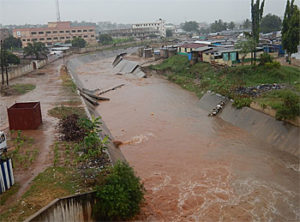 Nii Tetteh Otu II, Paramount Chief of Kpone Traditional Area has bemoaned the extent of pollution in water bodies in the Greater Accra Region due to industrialization and human activities.

Nii Otu in an interview with the Ghana News Agency at Kpone complained that most rivers, lagoons, and other water bodies in the Region had been left polluted with no measures to reclaim them.

“See how we are killing all the water bodies in Accra from Kpone through Chemu in Tema, Sakumo, Kpeshie, and the rest,” he said.

The Chief questioned what authorities were doing about such water pollutions saying plans must be put in place for industries whose activities were polluting waterbodies to aid in its reclamation.

Nii Otu suggested that such areas must be developed into recreational areas and tourist sites just as it pertains in other countries such as China.

In another development Mr Solomon Tetteh Appiah, Kpone-Katamanso Municipal Chief Executive has appealed to residents to plant trees in their houses to replace the ones they fell during the construction of their home.

Mr Appiah speaking to the GNA at Kpone said “those who cut trees to build must have that same spirit to replant them in their areas”.

He added that concreting every available space in the communities and houses was one major cause of flooding because when it rains the ground could not absorb the water.