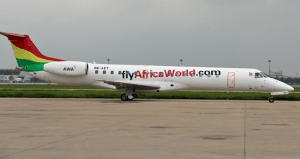 The Africa World Airline (AWA) has completed its first commercial flight, with its Embraer 145 to the Ho Airport, landing at exactly 1419 hours with Captain Kwesi Oteng, Chief Operations Officer of the Airline being in charge.

His co-pilot was Togbe Afede, Agbogbomefia of Asogli State and the Chief Executive Officer of the AWA, which carried some Executive Officers of the Ghana Civil Aviation Authority (GCAA), Ghana Airports Company Limited and the media.

The crew were met at the tarmac by Dr Archibald Yao Lesta, Volta Regional Minister, with a retinue of Chiefs and Queens from the Asogli State, after which a libation was heralded by Ametsitsi Debra, to appease the gods for safe landing and business flourishing.

Togbe Afede said today had become a memorable occasion and a dream come to fruition for him.

He praised the present and previous governments for the huge investments made in building the facility and attempts to operationalise it, saying posterity would come to terms for its existence.

He enumerated the advantages of airlines, saying it was more economical, efficient and convenient and asked the people to pack their vehicles and patronise flights to Accra and other cities and use Uber services to commute in those cities at a more affordable cost and safety.

“We need to make this airport viable and enhance its viability,” Togbe Afede said.

He announced plans to make the airport a training hub for pilots, flight engineers, as well as for maintenance purposes with support from the government and the GCAL, GCAA.

Togbe Afede said the “ball is now in the court of the people of the Region to demonstrate a zeal to keep the dream alive by patronising the product to boost its sustainability.”

Mr Yaw Kwakwa, the Managing Director of the GACL, commended AWA for finding business means in the Ho route and availing itself for full-fledged operations and delivering on its pledges.

He announced that the enthusiasm from the AWA venture was cascading into greater opportunity for the aviation sector in the Region as another entity, Passion Airline, was lacing its boots to make the Ho route part of its business.

He said tentative days for flights were still being considered and patrons must be assured of suitable days for business and pleasure.

He said the aviation industry and that matter, airline transport business in an expensive venture and demanded from the people a zeal to patronise flights from the area towards sustaining the investments.

An excited Dr Letsa commended AWA for living to its promise, a testament that the Ho Airport was now ready for business and praised Togbe Afede for personally making it possible for the start of flights all things being equal.

He paid glowing tribute to past and present individuals and groups, who have played various roles to make this day fruitful and appealed to the people of the Region to patronise flights from the airport to make it possible to run multiple flights in a day.