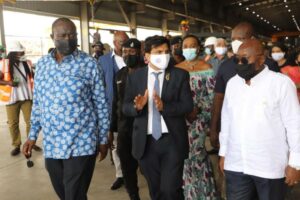 The B5 Plus Steel Plant, an enterprise operating under the Government’s One District, One Factory flagship programme, will convert scrap metal sourced across the country into materials for the construction industry.

With an initial installed capacity of 250,000 tonnes per annum, the plant, West Africa’s biggest fabrication plant, and the third biggest in Africa, will manufacture iron rods, wire rods, round bars and general steel products for both the Ghanaian and West African markets.

Commissioning the First Phase of the Plant, President Akufo-Addo noted that policies initiated and being implemented by his administration to advance Ghana’s industrial transformation had begun yielding dividends.

“This plant is a concrete manifestation that the new paradigm of economic development,” he said, pointing to his administration’s vigorous pursuit of value addition and industrial activities within a conducive and business-friendly environment since 2017.

The President noted that with as many as 350,000 graduates and thousands of apprentices and other non-graduates joining the labour market yearly in search of jobs, value addition and a vigorous industrial agenda presented a more sustainable way of providing the needed jobs to curb the growing unemployment in the country.

“I came into office in 2017, with a clear appreciation of the fact that unless we industrialize, that without the goal of adding value to our primary product, we cannot create the necessary numbers of high-paying jobs that will address this great problem of unemployment, as well as enhance living standards of the mass of our people. That is why government took steps to roll out the One District, One Factory initiative.

“What we’re witnessing here today is a true reflection of the benefits of the One District, One Factory…that is the creation of thousands of direct and indirect jobs and the expansion of value addition activities in the country,” he stressed.

Disclosing that the 76 factories operating under the One District, One factory initiative presently employing some 139,000 people, President Akufo-Addo was optimistic that when all the projects under the flagship programme came on stream, some 285,000 more Ghanaians would get direct jobs.

He restated government’s commitment to enhancing the existing business operating environment to provide incentives to strategic investments being made by companies to advance Ghana’s transformation agenda.

“I want to reiterate Government’s continued commitment to providing strategic support to companies and enterprises operating in Ghana. We will continue to enhance the existing incentive framework designed to make 1D1F-designated companies more competitive and sustainable.”

The President encouraged the management of the B5plus group to expand their operations into other parts of the country and also take full advantage of the African Continental Free Trade Area.

He gave the assurance that the barriers to greater productivity, including land security, and the reliable provision of utilities would be systematically addressed for investors to fully enjoy the incentives guaranteed by government.

The President later cut the sod for the second phase of the Plant, which nwould include an investment of $70 million with an installed capacity of 300,000 tonnes mixed steel goods. For

Mr Mahesh Thakwani, Chairman and CEO of the B5 Plus Limited, thanked the President for his guidance and encouragement under the One District, One factory initiative.

He pleaded with Government to impose an across the board ban on certain finished imported goods like African neighbors Nigeria, Gabon and Ivory coast had done, to protect the investments and the operations of the industry.

“We are able to produce these products locally in excess quantities and can not only serve the Ghana market but its neighboring countries too,” he said.

B5 Plus Company has over 1,000 distributors across Ghana, and directly and indirectly, supports and employs over 15,000 people.