April 10, 2021 General News Comments Off on Ghana military told to prepare against threat of terrorism in the north 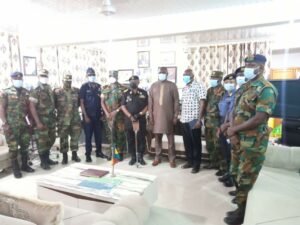 Vice Admiral Seth Amoama, the Chief of Defense Staff (CDS), has noted that the Northern, Upper East and Upper West Regions are very critical in the security architecture owing to the threat of terrorists from neighbouring countries.

He said even though Ghana had so far not suffered any terrorists attack it did not mean the country was immune to acts of terrorism, hence the need for the military to be fully prepared against their activities.

Vice Admiral Seth Amoama said this when he led a team of high ranking military men to pay a courtesy call on the Upper West Regional Minister, Dr Hafiz Bin Salih in Wa.

He said the visit to the Upper West Region was part of a planned visit to all Military Garrisons in the country to interact with troops and also with political and traditional leadership with the aim of establishing contact with them.

The CDS noted that government was supporting them to establish Units in the Northern Belt and called for the support of the various Regional Ministers in the area in that direction.

On the issue of the establishment of a Military Barracks in the Upper West Region, the CDS noted that government was in the process of signing a contract for the establishment of 15 Forward Operating Bases in the whole of the Northern frontiers and that some would be established in the Region.

“We are sure that within one and half years all the bases would be fully established,” Vice Admiral Amoama assured.

On accommodation challenge, the CDS said the Forward Operating Bases were coming with accommodation, which he believed would address that problem.

Vice Admiral Amoama noted that the President had commissioned some 40 Armored Personnel Carriers last week, adding that majority of them were being deployed to the North to retool the Armed Forces and increase their mobility.

Dr Bin Salih said whenever he met the President he often commended him for his continued effort in maintaining peace in the Upper West Region and gave the credit to the men and women in uniform for helping him to achieve that.

The presence of the military in the Region had helped lessened the nightmares they used to experience with regards to criminal activities and thanked them for that.

Dr Bin Salih pledged his continued support for the military in the Region to ensure peace and security.