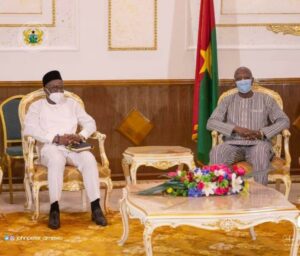 Mr John-Peter Amewu, the Minister for Railway Development, says plans are on course for Government to secure private sector partnership in the construction of the Ghana–Burkina railway interconnectivity project.

The final stage of the procurement process for the engagement of the private sector partner for the project is expected to be initiated by mid-April and expected to reach financial closure by the end of November, 2021, after successful negotiations and signing of the necessary agreements with the preferred private sector concessionaire.

It said also with the delegation were some officials from the Transaction Advisory Consortium, Messrs TEAM Engineering and Vision Consult Ltd.

It recalled that the two countries agreed in 2018 to breakdown the development of the railway interconnectivity project into four distinct phases with the Feasibility Studies and Competitive Procurement Process for Private Partnership forming the first two phases.

It said the third phase would involve the Analysis of Technical Studies and Detailed Engineering Designs to be undertaken by the private sector Party.

The statement said commencement of Physical Construction would be the final phase of the project development.

Mr Amewu noted that the proposed railway corridor between the Tema Port and Ouagadougou would contribute significantly to enable both countries benefit from the huge economic potential given the enormous mineral deposits such as bauxite, manganese and iron ore along the corridor.

He assured the Government and people of Burkina Faso that the Government of Ghana was prepared to see to the realisation of an efficient and effective railway network that would facilitate the socio-economic growth of the two neigbouring countries.

Touching on the advantages of the project, Mr Vincent Dabilgou, the Burkina Faso Minister of Transport, Urban Mobility and Road Safety, mentioned that railroad was more competitive as compared to road for the carriage of heavy products over long distances due to the cost damage to roads and issues relating to road safety.

He noted that the project, which started as a concept, had progressed significantly with both countries finalising and adopting Terms of Reference for the implementation of the railway interconnectivity project.

The statement said the two countries had agreed on the proposed route for the rail link which starts from Ouagadougou through Kombissiri, Manga, Béguédo, Garango, Tenkodog, Bagré-Pole, Zabré, Pô and ends at Dakola-Paga border link, a total distance of approximately 320 km.

It said Ghana section of the project, which forms part of the Eastern railway expansion along the Eastern corridor, was from Tema through Mpakadan, where a 97.9 km single standard gauge railway line is currently under construction with funding by an India Exim Bank loan facility of US$447.17.

The statement said the project was expected to be completed by November 2021.

It said the line would continue from Mpakadan and go through Kpeve, Hohoe, Jasikan, Nkwanta, Bimbila, Yendi, Tamale, Walewale, Bolgatanga, Navrongo and Paga.

The statement said the approved alignment included four branch lines from Asikuma to Ho, Nkwanta to Dambai, Bimbila to Sheini and Walewale to Nalerigu forming a total route length of approximately 782 km.

Mr Dabilgou was of the view that the construction of the railway between Burkina Faso and Ghana would lead to the improvement in the trade balance for both countries, through the facilitation of transport and optimisation of the operating cost of motor vehicles by shifting the overloads of the railway.

The statement said it would also stabilise cost of transportation leading to the reduction in the price of goods, the creation of 30,000 direct and indirect jobs, while improving the flow of agricultural products from Bagré-Pole to the market and also improve mineral exports to the ports.

It said the two Ministers later signed a Communique’ after which they paid a courtesy call on Mr Christophe Joseph Marie Dabre, Burkina Faso Prime Minister.

The statement said the Prime Minister expressed satisfaction with the progress made so far and urged the two countries to remain focused and continue working together to ensure timely execution of the railway project to facilitate trade, reduce transportation cost, create jobs, reduce poverty levels and enhance safety of road users.

It said said the Government of Ghana and Burkina Faso, led by their respective Heads of States, President Nana Addo Dankwa Akufo-Addo and President Roch Marc Christian Kabore, during a State Visit to Burkina Faso, in May, 2017, agreed that rail interconnectivity between the two West African neighbours was an important project to accelerate development and economic growth for the mutual benefit of the two countries.