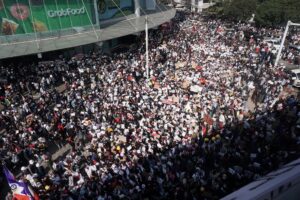 The number of pro-democracy protesters killed since Myanmar’s February 1 military coup has passed 500, a monitoring group said on Tuesday.

The Assistance Association for Political Prisoners (AAPP) puts the nationwide death toll at 510, after another 14 people lost their lives at the hands of security forces on Monday.

The deteriorating situation in Myanmar is alarming the international community, especially after 110 deaths were reported on Saturday alone, with the European Union calling it “a day of terror.”

The latest crackdown was in Yangon’s South Dagon township, where witnesses say that, during the past two days, the military has carried out a campaign of destruction that laid waste to whole neighbourhoods.

The General Strike Committee of Nationalities, one of the main groups behind the protests, on Monday urged Myanmar’s ethnic armed groups to stand on the side of protesters.

On Tuesday, three such groups heeded the call.

In a joint statement, they “strongly denounced” the military’s actions and said they share their sympathies with the family members of those who have lost their lives fighting for Myanmar.

“If Myanmar’s military doesn’t do the above mentioned facts and continue [[the killings], our three partner groups will cooperate with all nationalities who are joining Myanmar’s spring revolution in terms of self-defence,” the statement read.