Home / Feature Articles / Thanks for your support after the fire: Like the phoenix, I’m rising from the ashes

March 30, 2021 Feature Articles, Lead Story Comments Off on Thanks for your support after the fire: Like the phoenix, I’m rising from the ashes 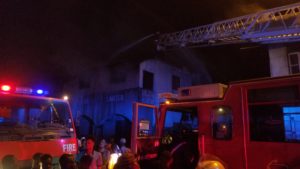 Typically, my day begins with me going to the gym very early in the morning to get an hour of intense physical exercise. I would sometimes return home with aching muscles, either from a new routine or as a result of suffering a muscle pull. When I was done and got ready to go to the office, I looked forward to the evening session before I headed home. Exercising helped to a great extent to keep me calm and focused. It was my best anti-dote to depression – given that caring about Ghana can be depressing.

But the COVID-19 ruined everything, as you well may be aware, and that included my daily time in the gym, which is also often the best ‘me time’ I have. It’s the only time I have to spend alone and for me, and I loved it. While I travel quite often, I keep to the routine in as much as I can. Each time I receive a hotel reservation, the first thing I do is to check if they have a gym. Sadly, I haven’t been to the gym since the pandemic broke out. I tried to jog out on the streets, but a knee problem which only got better when I exercised in a gym, won’t let me, because it got bad.

As you can see, I love to exercise, to get the adrenaline running, and to keep fit, both physically and mentally. But I also love what I have dedicated the largest part of my adult life for – journalism and writing. Often, I have been asked what keeps me going after 30 years of doing these. A number of things, but top among them, the greater public interest. The fact that what I do can bring some change in the society, save a life, improve communities, hold the powerful to account, and bring about transparency in governance, traits that democratic societies thrive on.

But the 30 years of my journalism career haven’t been rosy. Neither have the years been smooth – they’ve been a roller-coaster, with ups and downs. They have been hard and challenging, with small victories here and there – the pinnacle of which was my award to Columbia University’s Knight-Bagehot Fellowship in Business and Economic Journalism in 2013, where I also studied to obtain a Masters’ degree in journalism.

The past year has been hard. But in 2020, despite the difficulties and limitations imposed by the COVID-19 pandemic, I produced four outstanding investigations, alone in some cases, and in collaboration with other journalists around the world, including being part of the historic FinCEN Files with the International Consortium of Investigative Journalists (ICIJ), which has been nominated for a Nobel Peace Prize. FinCEN files brought together more than 400 journalists from around the world.

While, like everyone else I struggled with inadequate resources  to keep doing the public interest service I have been doing, a fire struck. On November 5, 2020. I didn’t go to the office that day. I worked from home. It was a Thursday. I had been to the office on Wednesday, and Fred Duhoe was with me. We had a small meeting and had hoped to continue further discussions, but I just didn’t feel like going, so I stayed at home.

In the evening of that fateful November 5 day, I was having dinner when a phone call from a young man in the Jamestown community changed everything. This is a young man I sent around occasionally. He called me sometime around 6:30pm or thereabout.

“The building is on fire,” he whispered.

“Which building?” I asked.

“Your office,” he said. And added, “But the fire hasn’t reached the side of the building where your office is, and the fire service people are already here,” he gasped. I felt a certain sense of reassurance.

Then in about five minutes, he called again. “The fire has reached your office,” he said.

I swallowed hard. Took my hand out of the bowl. I quickly washed my hand, dressed up and rushed to the scene. On my way, Jonas Nyabor and Fred called me. They made me know they were coming around to meet me at the scene. I felt a strong sense of support – it was comforting and reassuring. They joined me at the scene as we all witnessed the damage, taking photos as we could.

Jonas is one of the few journalists in the country that I am mentoring. He has been to that office to participate in one of the journalism hangouts that I used to hold there occasionally. I couldn’t have been more grateful, and Fred has been coming around offering some help with work.

As I took in the image of the burning building, it started to sink in. The grim sight would remain with me for a very long time. Smoke, smothering and flickering flames.

Often, I have been asked what keeps me going after 30 years of doing these. A number of things, but top among them, the greater public interest.

The side of the Cathedral Clinic housing my office, a colonial building that has been converted and being used as a private clinic has been razed down and left in ruins. A crowd has gathered, some locals were fetching water with buckets and pouring on parts of the building. I felt a lump in my throat. I swallowed hard again, and held my emotions in check. At that moment I knew I had broken down, but I had to hold up, I had to be strong. I have been in that office for some five years. Everyone in the clinic has been so nice to me and my team. We felt like we were part of the clinic. The clinic has its own story too. Former presidents of Ghana were seen and treated in that clinic.

But with time, and as a result of some misfortunes, due to principally a long illness of the originator who ran the hospital with his expatriate wife, the clinic had to scale down its operations – that created space as a number of the doctors’ offices remained empty and the clinic decided to rent them out.

As I write this, the wife of the founder of the clinic, herself a medical doctor, who kept it going for years in the absence of the husband, has sadly died a couple of weeks ago from COVID-19. I am still processing the loss.

As the fire officers sprayed water on smothering smoke and sparks of flame in corners and other areas of the building, I tried to peek from behind them, to try and assess the damage. The entire roof of the two-storey building had caved in, and so was the floor too – made of wood.

I couldn’t stand the sight any longer, so I left and came home. But I was deeply in pain having realized the extent of damage and potential losses. I started having images of the items in the office, laptops, camera accessories, a scanner, printers, audio recorders, Air Conditioner, books, papers, documents, furniture and furnishings, mementos, wall hangings, certificates, award plaques, gift items, posters and so much more that I don’t immediately recollect.

I could have lost much more, but because of the pandemic and for the fact that I worked mostly from home, I had taken some of my equipment home.

The clinic lost a lot too. Their dentistry, dispensary, files and other equipment.

I went back Friday morning, to have a better look at what the blaze had left behind. I stayed around a bit to chat with some of the staff at the clinic. Since that last visit, I have never had the courage to go back there.

Then some of you started to call, send emails, messages to commiserate and reassure me, when you heard about the fire. Someone called to say, “Like the phoenix, you will rise up from the ashes.”

Others called to tell me I wasn’t alone in the tragedy and that you were with me and would do something to help, and you did. You said you would help me get back on my feet. From far and near, from around the world, your empathy buoyed me and motivated me to stay the course – never to waiver.

I can’t mention everyone’s name, because I don’t want to leave anyone out, and because I may not remember everyone’s name, I won’t for now. But of course, you know yourselves. You stood by and with me, and some of you went beyond to raise funds, and donated.

Thank you, so much. For being there for me. ‘

Like the phoenix, I am rising up from the ashes, and Ghana, Africa and the rest of the world would be the beneficiaries of this re-emergence – because I am staying the course of doing journalism, the way it should be done.

Africa needs to make a deliberate effort to encourage and train more youth in Science, …