Tokyo Olympics to be held without overseas fans due to pandemic

March 21, 2021 Sports Comments Off on Tokyo Olympics to be held without overseas fans due to pandemic 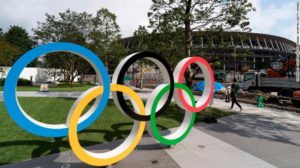 The Tokyo Olympics and Paralympics have decided to prohibit overseas spectators from attending this summer’s Games due to the coronavirus pandemic, local organizers said on Saturday.

“We share the disappointment of all enthusiastic Olympic fans from around the world, and of course the families and friends of the athletes, who were planning to come to the Games,” the IOC quoted Bach, who at the opening of a five-party meeting with the IPC, Tokyo organizers, the Japanese government and Tokyo’s city government warned decisions could be taken “which may need sacrifice from everybody.”

It is “very unfortunate” not to welcome overseas spectators, Hashimoto said after the meeting.

The decision was made during the online meeting with Bach, Parsons, Tokyo Governor Yuriko Koike and Japan’s Olympic Minister Tamayo Marukawa, she said.

The Tokyo Games were postponed from last year due to the pandemic and are due to open on July 23. The torch relay is to start on March 25 in Fukushima amid a strict hygiene protocol.

The committee will refund overseas fans who have already purchased tickets and a total of 630,000 tickets have been sold, according to committee chief executive Toshiro Muto.

The decision comes amid fears of a resurgence of new infections and increasing cases of new strains of the coronavirus in Japan.

“Every decision has to respect the principle of safety first,” said Bach. “I know that our Japanese partners and friends did not reach this conclusion lightly.

“Together with them, the IOC’s top priority was, is and remains to organize safe Olympic and Paralympic Games for everyone: all the participants and, of course, our gracious hosts, the Japanese people.”

Prime Minister Yoshihide Suga decided to end a coronavirus state of emergency for Tokyo and its surrounding prefectures on Sunday, which has been in place since early January.

The number of new daily cases has fallen sharply since January, however, Tokyo has reported more than 300 new infections for the fifth straight day.

Japan has so far avoided a coronavirus outbreak on the scale seen in Europe and the United States, with a total of about 456,000 known infections and more than 8,800 Covid-19-related deaths, according to a tally by broadcaster NHK.