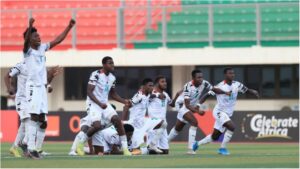 Each of the 27 players of the National Under-20 Team, the Black Satellites will receive $10, 000 from the government for winning the Confederation of Africa Football (CAF) Under-20 Championship in Mauritania recently.

In addition, each of the nine members of the Technical Team would also receive $10,000 for their contribution to the success of the team, making it a total of $330,000 on the entire team.

This was announced by President of the Republic, Nana Addo Dankwa Akufo Addo on Tuesday, March 9, 2021, at the Jubilee House in Accra.

According to the President, each playing member was entitled to $5,000 in cash and an investment facility in the form of a bond worth $5,000 which would mature in 10 years.

He said the investment was necessary due to the short life span of the playing career of sportsmen and women.

Ghana beat Uganda 2-0 in the final to win a record fourth African title on Saturday, March 6, 2021, at the Olympics Stadium in Nouakchott, Mauritania.