March 1, 2021 Sports Comments Off on Kotoko, Hearts share spoils in a high-octane affair 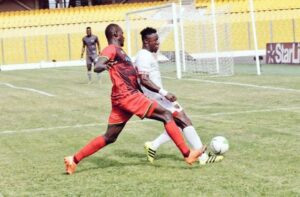 Asante Kotoko and Hearts of Oak were involved in a fascinating goalless draw game in their outstanding match-day 14 encounter played at the Accra Sports Stadium on Sunday.

With this draw both sides remain unchanged on the league table with Hearts and Kotoko occupying the sixth and seventh position respectively on 24 points each.

The game started on a blistering note with Referee Selorm Yao Bless awarding Kotoko a penalty in the first minute after Kwame Poku was brought down in the vital area.

Poku who is the leading top scorer for Kotoko stepped up from 12 yards but his effort was brilliantly saved by Richard Attah.

Hearts responded in quick fashion and Patrick Razak’s beautifully curled effort came off the post after a superb pass by Victor Aidoo.

It was an eventful first 10 minutes and Hearts should have grabbed the opener after Kwadwo Obeng Junior was left one on one with goalkeeper Razak Abalora but his dribble was unsuccessful with Razak Abalora clearing his lines.

The game settled well after the blistering start with both sides trying to string some passes together.

But it was Hearts who looked the more compact team and bossed the midfield department of the game with likes of Umar Manaf, Frederick Ansah Botchway and Benjamin Afutu in action.

Kotoko on the other hand were very passive and seem to lack ideas in the attacking third.

Naby Keita nearly opened the scoring for Kotoko against the run of play in the 33rd minute but couldn’t keep his composure as his effort went wide.

The most lively player on the pitch Patrick Razak nearly put Hearts infront in the 40th minute but once again Kotoko goalkeeper Razak Abalora delivered a brilliant save to deny the Phobians.

It was a good half for the Phobian lads but they couldn’t capitalize on the numerous opportunities that fell on their way as the first half ended scoreless.

Hearts started the second half like they ended the first half as they mounted relentless attack on the Kotoko defence.

Patrick Razak had a big chance to put the Phobians ahead after Manaf’s through ball found him inside the penalty box but he sent his effort into the empty stands.

Kotoko responded with Kwame Poku trying his luck from 25 yards but is was a routine save for goalkeeper Richard Attah.

Emmanuel Gyamfi who had a quiet first half nearly put the Porcupine Warriors ahead in the 65minute but his drive at goal was feeble as Hearts goalkeeper Attah safely gathered.

Substitute Isaac Mensah had a glorious opportunity to put the Phobians infront from the penalty spot after he was brought down in the penalty area but Razak Abalora produced a brilliant save to keep the game scoreless.

The game was very open going into the last quarter of the game with both sides looking to take the lead.

Kwame Poku had an opportunity to put the Porcupine Warriors ahead but his well drilled effort outside the penalty box rattled the cross bar to reprieve of the Hearts defence.

Both sides huffed and puffed but they had to settle for a draw and share the points.