The National Democratic Congress (NDC) Minority Caucus in Parliament on Friday accused the Government of allowing former Energy Minister Boakye Agyarko and other government officials to go scot-free for reportedly terminating a contract that resulted in Ghana being asked to pay $164 million as judgment debt.

Minority Leader Haruna Iddrisu, who was represented by former Deputy Energy Minister John Jinapor, said the International Court of Arbitration ruled against the Government of Ghana over the termination of an Emergency Power Agreement with GPGC Limited.

Mr Iddrisu noted that the ruling comes in the wake of a struggling economy already choking with huge and unsustainable debt, and that the order would “only contribute largely to the suffering of the ordinary Ghanaian and also jeopardise our future international agreements.

The Leader called for government officials involved in the illegal termination of the contract to be held responsible, and punished accordingly. 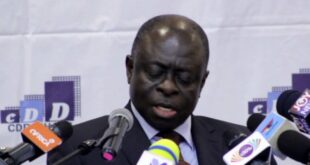 The Speaker of Parliament, Mr Alban Sumana Bagbin, on Wednesday said Parliament would require not …