My mother almost died on a snowy road in 1986

3 weeks ago Feature Articles, Lead Story Comments Off on My mother almost died on a snowy road in 1986 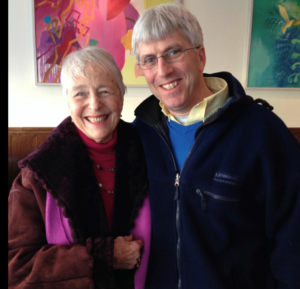 The car my father was driving swerved onto the other side of the road. A car with a snowplow on the front that crashed into Mom’s side.  Her seatbelt saved her life, but she broke a collarbone, multiple ribs and lost lots of blood.  The only reason she was given a 1 percent chance of survival was that local paramedics were already out on the road, heard the accident and responded instantly.

Then a junior at Stanford University, I flew back to Boston from California after hearing the news and drove to the hospital.  Its antiseptic smell enveloped me as I walked down the white tiled hallways to Mom’s room in an intensive care unit.

A screen enclosed her bed. I steeled myself and entered, recoiling involuntarily at what I saw.  Her eyelids resembled swollen purple eggplants.  Tubes ran in and out of her body. A respirator pushed air into her lungs though a small diamond-shaped hole cut in her throat. Each accordion-like thrust up and down of the machine issued a hiss and illustrated Mom’s tenuous hold on life.

I spoke softly, telling her that I knew she would get better and leave so that we could go to Chef Chow’s, our favorite Chinese restaurant. I talked and talked, uttering words of encouragement that I did not believe, but felt compelled to say and tell myself because the alternative was too terrifying.

More hissing from the machine.  The same hospital smell.  Mom didn’t move or even open her eyes.

Visiting her for the first time was one of the hardest things I ever did, yet it was harder still to come back for the second, third and fortieth times during her three- month stay in intensive care and a nearby rehabilitation facility.

But my brothers and I did just that as she embarked on her achingly slow, sometimes backward-moving, recovery process.

Then 48 years old, Mom was thrust back to the beginning of life, having to relearn how to stand, walk and control her bladder. The massive closed head injury she sustained meant that she also had to learn how to talk and behave appropriately in social situations. When she first started speaking again, her aphasia led her to call God “Brillo” and describe pain as “in the negative.”

Due to her tenacious will, extensive medical treatment, and willingness to try alternative therapies, Mom regained strength and language as she moved through the developmental stages and resumed her life as a functioning adult.  Using more basic and spiritual words than before the crash, she wrote prolifically about her recovery and the accident’s profound lingering effects.

She also reached out to others who had endured trauma.  She traveled to Washington, DC to testify before Congress.  She started a non-profit organization, Vital Active Life After Trauma, to help build a world where those who had suffered similar blows could live dignified and fulfilled lives.

Mom has encountered more physical challenges as she has become a mother-in-law and grandmother of four, and has met them with her customary grit.  After contracting adult onset diabetes the 90s, she shed close to 100 pounds and has maintained a healthier diet and lifestyle in the years since then.  A failing heart led to her having a pacemaker installed in 2010, the same year she had her right hip replaced.  She’s kept moving, even as she uses a walker more and more regularly each year.

Now 83, her muscles hurt each morning and the cartilage in her right shoulder is all but gone, but Mom still mounts her exercise bike daily. And though she has more trouble retaining information than before, she reads the newspaper and continues to write about her experiences.

Like a kaleidoscope, the accident’s lessons have shifted during the past 35 years. Whereas right after the crash it was about rallying in a time of crisis, now it is more about being viscerally aware of life’s precious fragility and the importance of savoring the gifts we might previously have taken for granted.

And of admiration of how Mom is weathering the COVID time, facing each day with an aching body, diminishing memory and unvanquished spirit.

Author is Padnos/Sarosik Endowed Professor of Civil Discourse at Grand Valley State University and the founder and executive director of the Center for Collaborative Investigative Journalism (CCIJ).