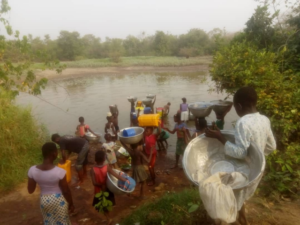 Water crisis has hit the communities of Banda in the Krachi Nchumuru District of the Oti Region, due to unavailability of the resource.

Nana Kwasi Omankumintey II, Paramount Chief of Banda in an interview with the Ghana News Agency (GNA) said it took the community most especially the women three to four hours to Wiae before getting a gallon of water for their domestic chores almost every day.

The community, which has a population of over 4,000 people, has to depend on two functioning boreholes to quench their thirst.

The Paramount Chief said they have to contract motor King drivers or tricycles to travel long distances to fetch water for them for a fee.

Madam Grace Tindo, an elderly woman narrating her ordeal to the GNA, said “it is not an easy journey, they have to wake up early in the morning to begin the search for a place that has clean running water to draw the resource home.”

Other women said, after toiling for the whole dawn searching for water, they have to assist their husbands on the farm to convey the harvested yam into the ban.

In an interaction with a cross-section of students from Wiae community, they feared for the worst if immediate efforts were not taken by the authorities from the District Assembly to solve the problem.