January 7, 2021 Editorials/Opinion Comments Off on The attempted coup in America 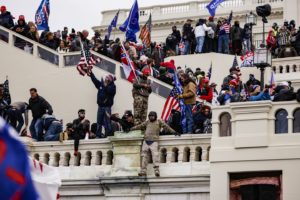 Of all the disturbing elements of yesterday’s attempted coup, perhaps the most distressing is how utterly unsurprising and predictable it was.

Donald Trump, Jr., the president’s eldest son, echoed those thoughts.  “This is wrong and not who we are,” he tweeted.

But, in fact, the temporary seizure of the capitol by force in an effort to subvert our nation’s fair and secure election was the direct and logical consequence of the lies and contempt for our democracy Donald Trump has shown throughout his presidency.

It has been visible in the repeated statements and tweets he made in the months leading up to the election-comments in which he said over and over that his defeat would by definition mean that the voting had been rigged.

It was obvious in the early hours of November 4, when Trump announced that he had won and called for the counting of all votes to be stopped.

It’s been clear in the dozens of unsuccessful lawsuits he and his legal team have filed around the country to try and undo the election results.   Many of those defeats came from the pens of judges Trump had appointed.

And it was evident yesterda in his incendiary remarks to the rioters he had encouraged to gather on the day our nation’s elected officials gathered to certify President-elect Joe Biden’s victory.  He tweeted, “Be there, will be wild!” in advance of the event and told them, “You will never take back this country with weakness.”

Yet, as shameful as all of these actions have been, and they rank among the very bottom of our nation’s history, the truth is that Trump has been abetted, enabled, encouraged and cheered on at every point in near unanimous fashion by the Republican Party.

In this most recent episode, this manifested itself in the dozen Republican senators who said that they would vote to reject the electors from disputed states as not ‘regularly given’ and lawfully certified.

The state of Georgia, one of the so-called disputed states, counted each vote three times.

We need to remember them.   Six persisted with their vote even after yesterday’s riot.

Beyond this incident, Republicans throughout the party have backed Trump throughout his tenure.

They’ve stayed silent in the face of his thousands of lies, in his characterizing the white supremacists who terrorized Charlottesville in 2017 as “very fine people” and his labeling of Haiti and African nations as “shithole countries.”

With just one exception, they voted to acquit Trump after the House impeached him last year.

They acquiesced and backed a party platform that held as a primary objective the re-election of Donald Trump.

It’s important to note that Trump has also received succor from television stations like Fox News, which in many cases has abandoned a pretense of seeking to do meaningful journalism.  (A number of Fox newscasters labeled the members of yesterday’s mob as peaceful protesters.)

He’s been supported by social media platforms like Twitter and Facebook that have allowed him to spread his misinformation and disinformation for years.  Only after yesterday’s events has Twitter suspended Trump for as much as 12 hours.  Facebook, which took a similar action, has given him no meaningful sanction throughout his tenure, except to take down some of his incendiary tweets, just as Youtube also took down some of his videos.

Yet an initial reckoning with this moment would be incomplete without pointing out the repeat actions throughout our history by armed white men to thwart our nation’s democratic will and promises.

Dear friend and award-winning historian Steve Kantrowitz wrote about the reign of terror Sen. Ben Tillman and his supporters waged in South Carolina after the Civil War to disfranchise most of the state’s voters during what Steve called the reconstruction of white supremacy.

Steve, Tim Tyson, John Hope Franklin and others wrote about the white supremacy revolution the Democratic Party in North Carolina engineered-the most notorious event of which was the Wilmington “race riot” of 1898 that claimed the lives of many black residents and rolled back decades of progress for African Americans in the state.

Kendi goes on to write that “Trumpism is the latest—or last—chapter in the story of this America.”

The accuracy of his assertion will be shown in the months and weeks ahead.

It is true that the coup did not succeed.  The mob was dispersed.  The House and Senate voted to certify Biden’s victory. His inauguration in two weeks will be accompanied by one of our nation’s most diverse cabinets and a Senate majority that may have been aided by Trump’s haranguing call to Georgia Sec. of State Brad Raffensperger in which the president urged him to “find 11,780 votes.”

The kind of systematic assault on the faith and systems underpinning our democratic institutions that Trump, his followers and today’s domestic terrorists have waged-an attack that draws on historic wellsprings-did not succeed at this moment.

But the coup’s failure does not mean that the attempt didn’t happen or will not have lasting consequences.

Trump’s departure from the presidency in two weeks in no way means that the forces that have supported him at every point and lead to yesterday’s riot will magically disappear.

And the perennial challenge for all of us to work to realize the lofty promises enshrined in our founding documents will only become more necessary, urgent and, most likely, more difficult across our beautiful, wounded and blood-soaked land.

Author is the Padnos/Sarosik Endowed Professor of Civil Discourse at Grand Valley State University and the founder and executive director of the Center for Collaborative Investigative Journalism.