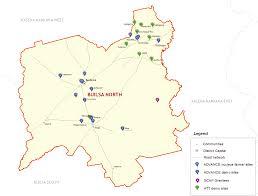 The Builsa North District in the Upper East Region has been upgraded to the status of a Municipality.

“It was upgraded into a Municipality through a Legislative Instrument (LI) 2422. So Builsa North is no more a District, but a Municipality,” he said.

“The President was here in 2018 to take part in the Feok festival, and told us that he signed a document to upgrade the District to a Municipality. It went through the process, and finally we received notice that the District is now a Municipality,” he added.

He said the upgrade would speed up development, and open up job opportunities for the teeming youth in the Builsa land.

“We are happy and thankful to President Nana Addo Dankwa Akuffo-Addo for the upgrade.”

Mr Afoko called on the people of Buluk, including those in the diaspora, to turn their attention to the area and invest in businesses that would boost the economy of the Municipality.

“That will help us a lot, and indeed we are calling on all Ghanaians to take advantage of the upgrade to invest in the area,” he said.

Builsa North had over the years enjoyed peace, he said, and urged the residents to continue to live in peace and unity as one people, to encourage investors to venture into productive businesses in the Municipality.

The MCE also commended officials of the Ghana Police Service for their efforts in combating armed robbery attacks in the area, which made residents live in fear.

“They have arrested people with ammunitions and I am so thankful to the Regional Police Commander, the Special Weapons and Tactics (SWAT) team, and in fact the Police within the Municipality,” Mr Afoko said.

According to him, “People are harbouring these criminals within. If we want to live in peace, residents should expose these criminals. If we shield them, we will create very big problems for ourselves.”

In an interview with some residents within Sandema town who expressed their views about the elevation, called for development and security enforcement to protect life and property in the municipality.

Madam Amina Hamidu, a Businesswoman, appealed to stakeholders to ensure the establishment of a Bank such as GCB in Sandema to complement the Builsa Community Bank, the only bank in the Municipality.

“We have only one Bank, which is usually crowded, especially on pay days, so now that the District has been upgraded, we need more Banks to make transactions easier for us,” she said.

She further appealed for the speedy construction of roads in the area, and a befitting lorry station to replace the present one which she said got muddy during the rainy season.

He also appealed to government to establish a tertiary institution in Buluk land.

“It is good Builsa North is a Municipality now, but it will make no difference if we don’t have any tertiary institution, at least a Teacher Training College or Nursing Training College will be of help to us,” he said.