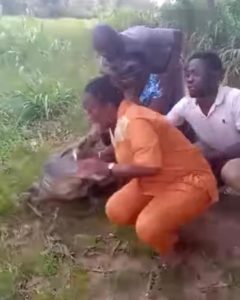 The Akatsi North District Assembly has disclosed that the woman in the Ave Crocodile Resort attack video had been treated and discharged.

Since January 01, 2021, a video has been circulating on social media and some other media outlets of an attack on a female tourist at Ave Crocodile Resort at Ave Dakpa in the Akatsi North District.

The victim as seen in the video was part of a group of local tourists who were at the Resort having fun and taking photos with one of the crocodiles and when it was her turn to also play with the crocodile, the unfortunate incident happened.

In a press release issued on January 03 by Dr Prince Sodoke Amuzu, the District Chief Executive for the area, preliminary investigations by the Assembly revealed that the incident occurred on December 20, 2020 and that the victim who sustained some level of injury was taken to a health facility, where she was treated and discharged.

The investigations also revealed that neither the guests nor the tour guide reported the incident to the Assembly for redress; the Assembly’s revenue staff were not at post when the incident happened and importantly, some security lapses were identified as a result of the incident, which would require urgent attention.

Dr Amuzu said the Assembly did not anticipate such an occurrence and promised that it would institute full-scale investigations into the operations of the infant facility and instruct measures in consultation with appropriate stakeholders like the Ghana Tourism Authority and the Wildlife Division to forestall a recurrence.

“This came as a shock to us, after the COVID-19 pandemic related restrictions on tourist sites, which did not spare the Ave Crocodile Resort, a new tourist site and barely about to get commercial. The fortunes and hopes of the Resort to attract patrons across the globe for a wonderful experience with naturally occurring friendly crocodiles at Ave Dakpa in the Volta Region of Ghana was yet to be realised.

The Akatsi North District Assembly will like to assure the public that the crocodiles of Ave Crocodile Resort are so friendly and that this is an isolated incident which could have been avoided.”

The release said the Assembly regretted “any inconveniences this incident and its associated videos may have caused all while thanking all for the show of interest and support so far.”

It appealed that “for the sensitive nature of the video to the public and the victim and those traumatised as a result of this video,” the media should stop further circulation of the video and rather direct any issue relating to the incident to the Assembly for redress.