The Ghana National Petroleum Corporation (GNPC) has earmarked an amount of $2.5 million for the construction of offices and classroom complex for the University of Energy and Natural Resources (UENR) in Sunyani.

Dr Kofi Koduah Sarpong, the Chief Executive Officer of GNPC announced this at an investiture ceremony of Professor Elvis Asare-Bediako as the University’s third Vice-Chancellor (VC).

Prof. Asare-Bediako, a Plant Virologist at the Department of Crop Science, School of Agriculture, University of Cape Coast (UCC) succeeded Prof. Harrison Kwame Dapaah whose tenure of office ended in August 2020 as the second VC of the University which was established by an Act of Parliament, Act 830, 2011 on December 31, 2011.

Dr Sarpong said the implementation of that project was in fulfilment of the Corporation’s commitment to support the vision of the new VC to provide the requisite physical infrastructure to enhance teaching and learning at the University.

He said the GNPC had been providing financial support to brilliant students of the University since the 2017/2018 academic year and was also financing the construction of an application laboratory at the University.

The GNPC would continue to support the University under the stewardship of the new VC for the achievement of the objectives and goals for which it was established, Dr Sarpong assured.

He stated UENR was a relatively young university but with lots of potentials, saying, if the necessary support was given, it would be better positioned to champion the growth and development of Ghana through its mandate in the areas of energy, environment, engineering, climate change and other related disciplines.

Dr Sarpong, therefore, urged staff, students, and all stakeholders to support the new VC to the best of their abilities for the University to progress beyond expectation.

Facebook Twitter WhatsApp LinkedIn
2020-12-14
emmakd
Previous Three dead in Kandiga-Doba conflict
Next When my COVID-19 test result came, it was negative, but I was sick 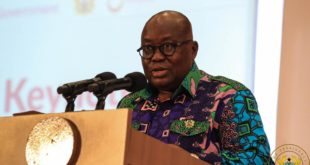