Uncertainty about who wins Ghana presidential election 24 hours after voting 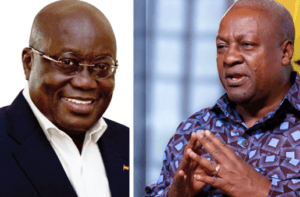 It’s been 24 hours after the historic elections of 2020 in Ghana, and there is uncertainty about a clear winner. Unlike other elections since Ghana reintroduced constitutional multi-party democracy in 1982, where there is always a knowledge of a clear winner 24 hours after voting, as at 8:30pm December 8, 2020, more than 24 hours since voting ended, it’s not clear who the winner of the presidential election is.

Not even the New Patriotic Party (NPP) the party in power is showing signs of being in lead, even though the National Democratic Congress (NDC) has made claims, that it is leading, the public hasn’t taken the claim serious.

Winners of the some Parliamentary seat are known, however, because, the constituency returning officer is mandated to announce the winner at that level, while the Chairperson of the Electoral Commissioner is the returning officer for the presidential election.

The results are trickling in slowly, and some Ghanaians expressing concern over what they say is the failure of the Electoral Commission (EC) to announce the election after 24 hours as it said could be possible.

The few results published so far by the EC shows that the opposition NDC has snatched more parliamentary seats from the NPP than how many seats the NPP has snatched from the NDC.

Ghanaians are waiting with baited breath to hear who is winning.

Would it be another one-term presidency experience, a comeback for a once defeated candidate or retaining of power? Would the minority become the majority in parliament, or the party in government would become the minority or it would have a slim majority?

It will all become clear, when the EC announces the final certified results.

There were 12 presidential candidates in the election, but two are the main contenders.