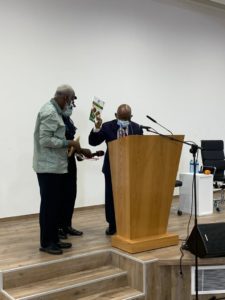 The 108-page Report assesses the progress of implementation of the Medium-Term National Development Policy Framework.

It would be recalled that in 2017 the President presented to Parliament a coordinated programme of economic and social development policies (CPESDP 2017-2024), in fulfilment of the requirements of Article 36 of the 1992 Constitution.

The coordinated programme, dubbed: “Agenda for Jobs: Creating Prosperity and Equal Opportunity for All,” formed the basis for the preparation of a detailed medium-term national development policy framework to be implemented from 2018-2021.

In line with the Commission’s mandate to monitor, evaluate and coordinate development policies, programmes and projects, the progress reports were prepared every year on the implementation of the policy frameworks since 2002.

Prof Oquaye described planning as an important factor of national development, and anticipated that the NDPC would be strong to insist on the right things to be done.

He said the 2019 APR would not only create an opportunity for the public to discuss its content, but all stakeholders would appreciate the achievements of the country without being politicised.

Dr Kodjo Esseim Mensah-Abrampa, the Director General of the NDPC, said the 2019 assessment was based on thematic areas such as economic, social, environment, infrastructure and human settlements, governance, corruption and public accountability, and Ghana’s role in international affairs.

On the economic dimension, there was inadequate financing for Small and Medium Enterprises (SMEs) due to fiscal constraints within the private sector as a result of contractions in market coverage, long term finance, high cost of accessing capital and low innovation capacity.

He said key policy recommendations include expediting of processes for establishing a National Development Financial Institution (Development Bank) that will provide long term loans at affordable rates to businesses and industry.

On the social dimension, the Report underscored the need to institute measures to improve net enrolment and educational outcomes, prioritising health promotion especially on the importance of diets and its implications on morbidity and mortality, enhancing investments in the provision of adequate basic water and sanitation services, and expediting the passage of the Affirmative Action Bill and ensuring its full implementation.

On environment, infrastructure and human settlements, the achievements include creation of 83,000 jobs under the forest plantation programme, the approval of the Digital Terrestrial Television policy and Energy Sector Recovery Programme, and the enactment of the National Road Safety Authority Act, 2019 (Act 993).

Regarding governance, corruption and public accountability; the goal for this dimension was to maintain a stable, united and safe country. This was achieved through broad objectives across 11 focus areas.

Some observable achievements were the passage of 13 Bills into law, enactment of 15 Legislative Instruments; ratification of 16 International Agreements; improvements in Police officer to citizen ratio; and recovery of GHC862,696.62 from implementation of 139 recommendations of the Public Accounts Committee.

On Ghana’s role in international affairs, the Report recommended expediting the redevelopment of the Trade Fair Centre to help make Ghana a trade hub as the country hosts the African Continental Free Trade Area (AfCFTA) Secretariat.

It also called for expediting actions on the technical and administrative modalities for the implementation of the ROPAA roadmap.