November 20, 2020 General News Comments Off on Narcotics Control Commission gets new governing board 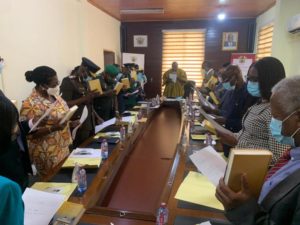 The Governing Board of the Narcotics Control Commission (NCC) has been inaugurated with the mandate to assist in the fight against illicit drug trafficking, substance abuse, and transitional organized crime.

The 15-member board was constituted by President Nana Addo Dankwa Akufo-Addo under section 4 of Act 1019 to steer the affairs of the Commission to combat offences of narcotics drugs and plants cultivated for narcotics purpose and related matters.

The Board is Chaired by Mr J. Kaiffe Mensah and includes Mrs Delese A. A. Darko, the Chief Executive Officer of the Food and Drugs Authority, Mr Isaac Kofi Egyir, the Director of Prisons at the Ghana Prison Service; and Mr Laud Ofori Afrifa, a Deputy Comptroller-General of the Ghana Immigration Service.

Others are Madam Yvonne Atakora Obuobisa, the Director of Public Prosecution at the Office of the Attorney General, Mr Duncan Opare, the Deputy National Security Coordinator, Mr Francis Torkonoo, the Acting Director-General of NCC, Mrs Adelaide Anno-Kumi, the Chief Director of the Ministry of the Interior.

Mr Ambrose Dery, the Minister for the Interior, who inaugurated the board at a brief ceremony in Accra on Wednesday, said since 2014 the Narcotics Control Board (NACOB) had been without a governing board.

He said the Governing Board of NACOB was dissolved in 2014, following the ‘Nayele’ cocaine saga.

He said the government with a determination to position NACOB ensured that the Act 2020 (Act 1019) was passed to enable the institution to have a full complement of stakeholders to enhance the fight against the global drug menace.

Mr Dery said the law had transitioned NACOB to NCC, with enhanced power and mandate to curb the drug menace in line with the comprehensive Multidisciplinary Outline recommended by the United Nation.

The Commission, he said, had the primary responsibility to enforce, control, investigate, arrest and prosecute drug dealers.

He said it had the mandate to treat, rehabilitate and socially re-integrate people who had substance use disorders.

It will also educate and raise the awareness of the public, especially the youth.

Mr Kaiffe Mensah, the Chairman of the Governing Board, thanked the president for the appointment and pledged that the team would guide the Commission in the execution of its responsibilities.

“Voluminous water has been let to go under the bridge. The Concave at the Commission must now be guided upwards in a forward, progressive fashion. This will require the collective engagement of all stakeholders,” he said.