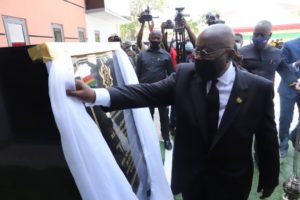 The Ministry of Foreign Affairs, on Friday, commissioned the refurbished Passport Head Office building at Ridge in Accra.

Madam Shirley Ayorkor Botchwey, the Minister for Foreign Affairs and Regional Integration, in her welcome address, said the new Passport Head Office was a three-level purpose-built edifice, with ancillary facilities such as a meeting room, cafeteria for staff, and a well-structured Records/Archival room among others.

It is expected to provide the most conducive and enabling environment for both staff and clients.

The Foreign Minister described the occasion as a historic moment in the administration of passports in Ghana, saying the achievement was the culmination of the positive interventions and reforms undertaken by the government to significantly transform the operations of the passport office.

She said the Ministry had successfully implemented the online passport application system, thereby, phasing out the manual scheme, which hitherto was the norm, saying the interventions had eliminated all the difficulties associated with the acquisition of passports, notably turnaround time for delivery of passports, document fraud and middlemen, popularly known as “goro boys”.

Madam Ayorkor Botchwey said the Ministry was also in the process of renovating all existing regional Passport Application Centres (PACs) to give them a facelift and improve service delivery.

The acquisition of passports, she said, had further been made easy and brought to the doorstep of Ghanaians, following the establishment of Passport Application Centres in Kumasi, Tamale, Koforidua, Tema, Ho, Takoradi, and Sunyani, as well as Premium PACS in Accra and Kumasi, to provide expedited services.

The Foreign Minister announced that the Passport Office would soon be commissioning new PACs in Cape Coast and Wa as well as a new Premium Centre in Tamale in the coming days.

She said to make passport acquisition easier for Ghanaians in the Diaspora, the Ministry had extended biometric passport services to Ghana’s Diplomatic Missions abroad, and that a total of twenty-two Missions were currently able to issue biometric passports.

The Foreign Affairs Minister stated that it was expected that the remaining Missions would commence the issuance of biometric passports by the second quarter of 2021.

She, therefore, appealed for the cooperation and support of all stakeholders to protect the sanctity of the Ghanaian passports, saying it was a civic responsibility to guard the passport application process and not yield it to unscrupulous people to undermine its integrity.

Madam Ayorkor Botchwey admonished management of the facility to preserve and properly maintain the beautiful office in, which so much, resources had been invested, and also commended consultants and contractors who worked hard to ensure the successful completion of the project.