The United States surpassed 10 million coronavirus cases on Monday, according to a tally by Johns Hopkins University, as the country is in the grips of a third wave of the pandemic.

The US has seen far more cases and deaths than any other nation, with over 237,700 virus-related fatalities in a population of about 330 million.

The grim milestone comes just 10 days after US cases eclipsed the 9-million mark.

Hospitalizations, deaths and infection rates are rising – with more than 100,000 new daily coronavirus cases reported on average over the past week. Caseloads have been on the rise again since September.

The most infections ever recorded in 24 hours was on Saturday, with over 128,000 new cases, according to the Baltimore-based university’s tracker.

The surge is widespread across the US and particularly severe in Minnesota, Illinois and other northern states.

In New York City, which gained control of its infection rate after being the national epicentre of the outbreak in the spring, Mayor Bill de Blasio urged residents to prevent a “dangerously close” second wave of the coronavirus and potential ensuing lockdown measures.

“We have to do everything in our power to stop the coronavirus from reasserting in New York City,” he told a press conference, calling on people to wear face masks and maintain social distancing.

Health experts are worried that with colder weather and people spending more time indoors, the virus will spread more rapidly, and local authorities are cracking down with new mitigation efforts.

Joe Biden, the new US president-elect, on Monday warned of a “very dark winter” ahead and announced the formation of a task force to plan his response to the pandemic. He also implored the public to wear face masks.

Biden routinely slammed President Donald Trump for the current administration’s handling of the crisis, as Trump has falsely claimed the country is “rounding the turn,” despite evidence that a third wave is raging across the nation.

In a major milestone in the search for a defence against the outbreak, US pharma giant Pfizer and German firm BioNTech announced that their experimental vaccine is 90-per-cent effective in preventing COVID-19.

More than 50.7 million coronavirus cases have been recorded worldwide, and over 1.2 million people have died, according to Johns Hopkins University.

After the US, India and Brazil have the highest number of confirmed infections, at 8.5 million and 5.6 million, respectively.

Experts believe the true number of cases is likely to be far higher than the official tally. 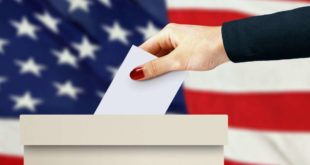