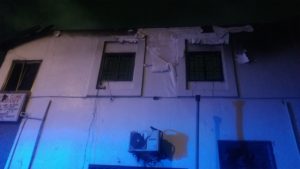 Fire from ‘unknown’ source ravaged the Cathedral Clinic and Laboratory Limited which also housed the offices of ghanabusinessnews.com at about 6pm on Thursday according to eyewitnesses.

The one storey structure on the Atta Mills High Street, about 50 meters from the sea, also accommodates the offices of online business news portal the Ghana Business News, owned by investigative journalist Emmanuel K. Dogbevi.

“I was having supper when I had a call at about 7pm about fire in the opposite end of the building to where our office is. I had assurance from the caller that, personnel from the Ghana Fire Service are there to bring it under control. The second call which came in a five-minute-interval said the whole building has been razed down including my office,” Dogbevi said.

According to Dogbevi, he lost some valuable items including rare books, documents, equipment such as printers, laptops, and voice recorders, microphones, and camera accessories.

Due to the combustible nature of the top floor of the building, all attempts by the fire tenders save the building were unsuccessful. The roof caved in at some point.

The securityman on the premises managed to escape to safety.

It took four fire tenders with support from the youth in the community, about three hours to bring the fire under control.

Investigation is yet to establish the cause of fire and its impact in terms of cost to the property owners.

Poverty, cause of teenage pregnancies in Assin Central Municipality – GHS

GRNMA signs agreement with government over conditions of service