Home / Editorials/Opinion / The massacre at Lekki must not go unpunished

October 21, 2020 Editorials/Opinion, Lead Story Comments Off on The massacre at Lekki must not go unpunished 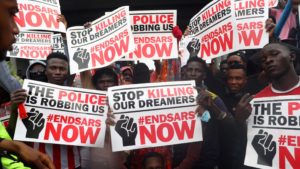 Democracy isn’t only about the right to form political parties, contest, win elections and run a country the way one wants. Neither is it about fighting an election, winning and gathering a country’s resources at one’s feet, like the spoils of war. Democracy also includes the rights of citizens to free expression and protests. Constitutions all over the world in countries where leadership is elected through the ballot guarantee the right of citizens to protest. That’s why the brutal killing of peaceful protestors on the Lekki toll booth in Lagos, Nigeria is a blot on the Nigeria government’s already tainted conduct, in so far as its relations with its citizens are concerned. The act must be condemned and the perpetrators must be brought to book.

For some weeks now Nigeria youth have been protesting and calling on the government of President Mahamadu Buhari to disband a notorious police unit known as the Special Anti-Robbery Squad (SARS). The protestors contention has been that members of the SARS have been acting with impunity, indiscriminately arresting on mere suspicion young Nigerians, extorting money from them, brutalizing and killing innocent people and disposing of their bodies. The youth have consistently accused the SARS of robbing and killing them instead of protecting them from armed robbery.

The Nigeria authorities in response ordered the withdrawal of the SARS and redeploying them. But be that as it may, the youth have grown not to trust the authorities, and therefore doubted the sincerity of their action. Further demanding thorough investigations into the activities of the SARS and where necessary punishment meted to perpetrators and justice dispensed to victims of their atrocities.

The youth have been protesting peacefully under the hashtag #EndSARS. The protestors have also raised concern about the use of thugs and hoodlums by opponents of the protests to infiltrate their ranks and cause mayhem, including attacking protestors and burning down public buildings including police posts.

Some States responded by announcing curfews and bans on protests, but the youth persisted. Then on the night of Tuesday October 20, 2020, thousands of youth had massed up on a major toll booth at Lekki in Lagos. They sat on the ground, holding hands, the Nigerian flag and singing the national anthem when suddenly reports starting making the rounds that the CCTV cameras at the toll booth were being taken down, then the lights went off and men in military uniform started firing live rounds into the protestors. Some were killed and some sustained injuries as there was a stampede.

According to reports monitored on social media, the men after shooting and killing some of the protestors carried the bodies away.

It’s not clear yet how many protestors have been killed. But a protestor has told the BBC, he counted about 20 bodies.

Another eyewitness said the protestors were kneeling down in surrender when they were shot at and killed.

An eyewitness tells BBC that #EndSARS protesters were kneeling in surrender when security forces fired on them in Lekki, Lagoshttps://t.co/7bLfvneQfX

The Nigeria military authorities have come out to deny their men were involved, but the Lagos State authorities who say the military men who shot at and killed the protestors were not under its control has announced it will investigate the matter.

Nigeria, has always had the opportunity to be the shining star of West Africa and to a large extent of the continent. But it has consistently struggled to be a good example to its neighbours, becoming a case of a bad example of a big brother.

The massacre on the Lekki toll booth should not go unpunished. No democracy in any form or shape should so cruelly take away the right of its citizens to free expression, including protests.

The killing of the youth, the future of Nigeria in such a calculated and menacing manner should be investigated and the perpetrators should be punished.

The young people were only asking to be allowed to live and reach their full potential. But the ones who should protect them, turned against them and took their lives.

The massacre of Lekki should not go unpunished.

#FixTheCountryNow: Where is Ghana heading?