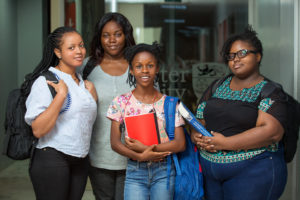 Fifty-eight per cent of girls studied out of 14,000 across the globe have experienced varied forms of online harassment, says a study conducted by Plan International on the ‘experiences of girls being online on social media platforms’.

The study, which was conducted in June and July 2020 in 22 countries including Ghana with a structured questionnaire, examined the behaviours, attitudes and beliefs that limited girls’ freedom and opportunities on social media platforms.

The report was presented when Plan International Ghana, joined the world to commemorate ‘International Day of the Girl Child”, which falls on October 8 of every year, in Accra.

The report also said online harassment of girls start from age eight and majority got harassed for the first time between the ages of 14 to 16.

Eighty-five per cent faced sexual harassment; 64 per cent, abusive and insulting language; 57 per cent, threats of sexual violence; 50 per cent, purposeful embarrassments; and 43 per cent, body shaming attacks, she said.

Madam Abbey said 42 per cent had threats of physical violence; 40 per cent, stalking and annoyance; and 25 per cent were attacked with racists comments among other types on online harassment.

Disclosing the effects of the harassment, she said, 24 per cent of the girls afterwards felt physically unsafe, 43 per cent lost self-esteem or self-confidence, 42 per cent felt mentally or emotionally stressed and 18 per cent encountered problems at school.

Madam Abbey recommended that government reformed legislative frameworks to deal with online harassment and violence against girls and young women, adding that, laws be made to hold social media platforms accountable.

Civil society organisations were also encouraged to develop and deliver digital citizenship education and awareness on the opportunities and online risks with a focus on online abuse.

Mr Solomon Tesfamariam, the Country Director of Plan International Ghana, said abuse and harassments facing girls including online, were fast becoming major threats, with very limited measures to protect them, especially in these times of the COVID-19 pandemic.

He said Plan International Ghana, therefore, adopted the theme: “Freedom Online” with the hashtag “#FreeToBeOnline” to support girls against abuse and harassment on social media.

For his part, online violence silenced girls and served as a barrier to their leadership, hence, the need to sensitise them on the concept of online safety and harassments from different perspectives.

Mr Tesfamariam said it was clear that little was being done to protect girls and young women online, meanwhile, the treatment they received was unacceptable, frightening and must be stopped.

Mrs Gifty Twum Ampofo, the Deputy Minister of Education in charge of Technical, Vocational Education and Training, said the world was in an era where it could not do without the internet.

She advised girls and young ladies not to allow themselves to be drawn into unacceptable behaviours on social media as a result of their beliefs, culture and influences from peers and the contemporary world.

“My girls, you have to be smart and set your priorities right. Many girls have been abused and murdered because of one picture they shared on social media or some expressions they made. Don’t allow yourselves to be moved by words from men like you are beautiful, and smart. Don’t allow yourselves to be flattered, because for the tablets, you will have them soon,” she advised.

She said Ghana had adopted the United Nations ‘Safe School Declaration’ and the Ministry had received funding to put together a ‘Safe School Policy’ to safeguard children.