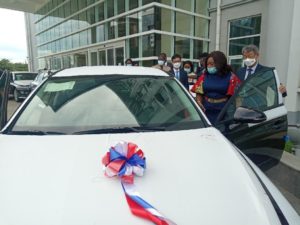 The Korean Government has donated five Hyundai vehicles to the Ministry of Foreign Affairs and Regional Integration to enhance its service delivery.

The five vehicles, which consist of one Hyundai Genesis and four Hyundai Sonata, cost $177,000.

“The donation is very timely and much welcome as it will, undoubtedly, go a long way to augment the Ministry’s fleet of vehicles and enhance our operations,” she said.

She said she was also particularly pleased to note that the vehicles were one of the many positive outcomes of the historic visit embarked upon by Madam Kang Kyung-wha, Korean Foreign Minister, to Ghana in July 2019.

Madam Ayorkor Botchwey noted that the Korean People and their Government had over the years taken keen interest in Ghana’s socio-economic development and that the two countries had deepened their friendly and cordial bilateral relations.

She said within the framework of the Technical, Economic Cooperation and Trade Promotion Agreement signed in 1990, Korea had been consistent in delivering various forms of assistance to Ghana, channelled through the Korean International Cooperation Agency (KOICA) and the Korean Foundation for International Healthcare (KOFIH), in critical areas such as transportation, fisheries, agriculture and human resource development.

“I am confident that the gift will inject dynamism into our rapidly growing and mutually beneficial relationship and enable our two countries to forge closer ties at the bilateral and multilateral fronts,” Madam Ayorkor Botchwey said.

The Minister acknowledged Mr Sungsoo for his personal effort in facilitating the delivery of the vehicles.

Mr Sungsoo said it was his hope that the vehicles would be helpful and thanked the Government of Ghana for its continued support for the Government of Korea, noting that the relationship between the two nations would continue to be deepened.

Present at the function were the two Deputy Ministers of Foreign Affairs and Regional Integration – Mr Charles Owiredu and Mr Mohammed Habib Tijani.