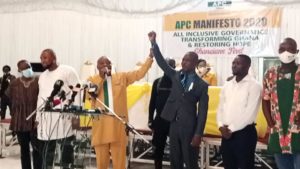 Dr Haassan Ayariga, Founder, and flagbearer of All People’s Congress (APC), one of the political parties contesting in Ghana’s 2020 elections, has announced Mr Frank Yaw Kuadey, an Accountant, as his running mate; and launched the party’s 2020 manifesto, in Accra.

He said Mr Kuadey is a married man, with five children, and hails from Agbozume, in the Volta Region.

“The nomination of Mr Kuadey is not by chance, but a divine assignment to partner Dr Hassan Ayariga to win the 2020 elections,” Dr Ayariga said.

The APC flagbearer asked the running mate and the rank and file of the party, to begin working immediately, to tell the Ghanaian electorate to change, rather than, what he called “recycle the current Ghanaian political leadership” to improve the nation’s political and economic fortunes.

“I want to see him dirtying himself, preaching to the Ghanaian people, that there is a new leader, not to recycling of NDC or NPP, but that change is coming,” adding to an applause of the audience, mostly the youth, that “help us to help you get the change.

“If 2020 is about policies and manifestos, then we have already won the elections.”

Launching the manifesto, the APC Founder, described the content as polices rather than promises, pledged to run a campaign of peace before, during and after the elections.

He urged the opposition National Democratic Congress (NDC) and the governing New Patriotic Party (NPP), also contesting in Election 2020, to discard any tendency for violence

“I appeal to the NDC to dump their ‘boot for boot’ and the NPP to dump their ‘Charlie wote to Charlie’. We’re not going to war,” Dr Ayariga said, and appealed to President Nana Addo Dankwa Akufo-Addo, and Mr John Dramani Mahama, the flagbearers of the NPP and NDC respectively to ensure that they and their followers commit to peaceful elections.

“If people are going to die for me to be president, I’ll never be president in my life,” Dr Ayariga said.

Describing Ghana as having a “disgraced democracy,” and tired of NDC and NPP, Dr Ayariga assured Ghanaians of better democratic governance through institutional reforms, and promised to tackle corruption head-on.

He said his wife would miss him in the bedroom on the first day under his presidency, as he would be in consultations on dealing with corruption.

The APC flagbearer wondered why Ghana, with a vast cultivable land had to spent $1.2 billion on rice imports annually, stressing that the APC had designed policies for the nation to go back to the consumption of local foods.

Also, the APC would create a debt recovery fund, and initiate legislation to ensure that all person s who want state appointment would pay any debt owed he state before taking up appointment.

On the environment, Dr Ayariga said, an APC Government would ensure that residents would come out themselves and desilt all choked gutters in front of their houses themselves.

The APC would also come out with training and investment funds for head porters, locally called “kayayei”.

Also commercial private public transport (trotro) operators, would be given loan facilities to own their own vehicles.

On mining activities and concessions, Dr Ayariga assured the electorate of policies that would put the Ghanaian first in the giving of concessions.

He assured the electorate of better electricity service with light on all streets, saying “I’ll put street light in every corner.”