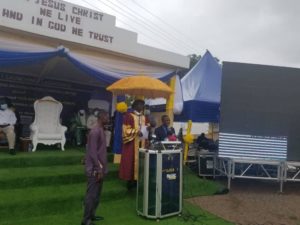 The Centre of Awareness (COA) has inaugurated a new company known as the COA Research and Manufacturing Company Limited to enhance its operations.

Additionally, its COA Food Supplement product has also been re-branded as COA Herbal Mixture in line with its restructuring processes following the recall of its product from the market by the Food and Drugs Authority (FDA) sometime in April over contamination.

The ultra-modern facility which has a state-of-the-art research and manufacturing Centre, offices, reception, and a laboratory, replaces the old structure, after the FDA ‘s green light to the Company to resume operations.

The restructuring, according to Professor Samuel Ato Duncan, Executive President of COA cost the company GH¢10 million and was executed over four Months with technical support from the FDA.

COA which was established to address issues confronting global peace in 1998 but ventured into research in 2005 to look for plant-medicine solutions to diseases that the World claimed had no cure.

Through its scientific research, COA-Food Supplement (FS) was developed and registered as a food supplement and subsequently approved by the FDA in 2016 which gained both national and international recognition due to its efficacy.

However, on Wednesday, April 08, 2020, the FDA ordered a recall of all COA-FS products on the market with the explanation that they had been contaminated with Escherichia coli, a type of bacteria that normally lives in the intestines.

The company subsequently recalled all its products with a market value of over GH¢1.6 million from the market and begun to work with the FDA to put in place corrective measures to prevent future occurrences of contamination.

This, Prof, Duncan explained was because the Company’s strict adherence to regulatory guidelines to ensure the safety and quality of its products.

The preventive measures put in place included the purchasing and installing of new automated equipment to reduce human contact, installation of security structures to prevent possible contamination, employment of technical and non-technical staff, and training of staff by the FDA on Good Manufacturing Practices (GMP).

The FDA has thus, issued a market authorization to COA having satisfied all safety requirements.

Prof Duncan expressed gratitude to the FDA whose guidelines and consistent supervision had enabled them to produce good quality products per best standards.

Mr Thomas Adjei Baffour, Deputy Central Regional Minister praised the invaluable efforts with which the COA Research and Manufacturing Company had served and continue to serve the health needs of Ghanaians.

He further commended the Company for how it dealt with the misunderstanding between them and the FDA leading to the withdrawal of their COAFS products.

He described the situation as a “fortune in disguise” which had paved the way for the massive transformation of the Company which will also help prevent any future contamination of their products.

Mr Baffour urged them to strictly abide by all the commendations offered by the FDA to meet the international standards of producing herbal medicine.

“Now is the time for you to take advantage of the opportunity given you by the FDA to put Ghana once again on the international herbal medicine market”, he added.

He admonished the FDA to always provide support and consultancy to traditional medicine companies for them to churn out healthy and competitive products.

Mr Freddie Blay, National Chairman of the National Patriotic Party (NPP) noted the COA Research and Manufacturing Company was one of the best indigenous manufacturing companies in the Country.

He was extremely impressed that the Company had subjected its products to extensive scientific research and analysis by renowned research institutions both locally and internationally.

He noted that the herbal industry played a significant role in healthcare delivery in the country saying, but for traditional medicine, many Ghanaians would have struggled to access healthcare.

In this regard, he said Government was committed to supporting the herbal medicine industry and fuel research and development of its products to obtain international reputation.

He, therefore, encouraged COA and other local herbal medicine companies to take advantage of the Government’s policies to meet international standards for packaging and export.