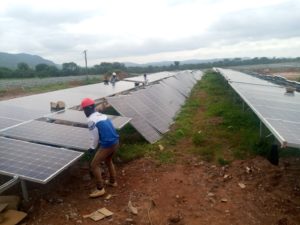 The Bui Power Authority (BPA), the Managers of the Bui Hydropower Dam project in the Banda District of the Bono Region, is constructing a $480 million solar energy facility to augment its power supply system.

On completion, the solar farm would add 250 Megawatts (MW) of power to the existing 400 MW dam’s production capacity.

The first phase of the solar development which is a 10 MW power is set to be completed by October, this year, with the second phase, 40 MW to be completed at the end of 2020.

According to the BPA, expansion works had already been completed on the Dam’s switchyard to accommodate the additional energy that would be generated from the 297-hectare solar farm, expected to last 25 years, before the recycling and changing of panels.

Mr Peter Acheampong, the Renewable Energy Manager, BPA disclosed this when he took journalists around the project at the dam’s plant site at Bui over the weekend.

Work on the installation of the solar panels at the farm was steadily progressing.

He indicated as part of the BPA’s achievements within the renewable energy sector, a 1MW floating plant was also under construction on the Bui Reservoir, a project which would be the first of its kind in the West Africa sub-region.

Mr Acheampong explained the development of the solar project was part of the government’s National Determined Contribution (NDC) towards the United Nation’s Framework Convention on Climate Change (UNFCC).

It strives to adopt innovative and sustainable technologies within the renewable energy sphere to meet its commitment to the agreement.

The government through the Ministry of Energy has outlined programmes and policies that would assist in the achievement of the set target of the Sustainable Development Goals (SDGs) 13-Climate action.

In that regard, Mr Acheampong said the Authority had since positioned itself to spearhead the development of renewable energy (particularly solar PV and hydro) within the country to promote the government’s policy of increasing the renewable energy mix by 2030.

With the addition of the solar power, he said the BPA would still be capable of its normal operations while at the same time collaborating with the solar plant during the daytime off-peak period by providing the needed intermittency mitigation, power modulation and voltage regulation.

“To further complement our efforts in renewable energy, the Authority’s properties, particularly the head office in Accra operates as a ‘green building’ by running a hybrid of 30KW solar PV and 5KW wind systems, thereby reducing the total energy consumption of the building,” Mr Acheampong added.

The Bui hydro-electric project was designed primarily for hydro-power generation. It, however, includes the development of an irrigation scheme for agriculture development and presents an opportunity for enhanced eco-system and fisheries.

It also comprises a resettlement and community support programme.

Inaugurated in 2013, the project, which was expected to cost about $622 million, was funded with a concessional loan of $263.5 million from China, a buyer’s credit of $298.5 million from the EXIM Bank of China and government’s contribution of 60 million dollars.