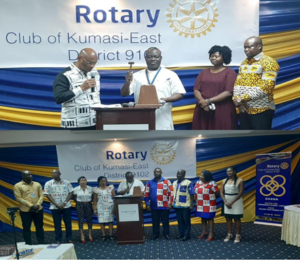 The Rotary Club of Kumasi-East has pledged to intensify efforts to complete all ongoing developmental projects to bring relief to people.

Mr. Francis Tettey-Ahwah, the outgoing President of the Club, said the Club had since last year, spent more than GH¢700,000.00 on development projects, some of which were yet to be completed.

He mentioned some of the projects as the St. Louis water project in Kumasi, a borehole at Kunsu, distribution of computers for schools, a Dental Nursing training school at the Ankaase Methodist Faith Healing Hospital, donation of an ambulance to the Yeji hospital, and donation of personal protective equipment to health facilities and communities during the outbreak of COVID-19.

Mr. Tettey-Ahwah was speaking at the 29th handing over ceremony and induction of the new executive of the Club in Kumasi.

New members were also ushered into the Club.

Rotary International is a global charity organization with about 1.2 million members in 5,000 clubs spread across the world.

It has over the years been involved in poverty eradication, promoting clean water and sanitation, championing peace, provision of quality education, and addressing health challenges.

Mr. Tettey-Ahwah charged new executives of the Club to continue working for Rotary Club to meet its mandate and vision of touching lives in the society.

Mr. George Fuseini, the newly elected President of the Club, pledged to work hard together with the club members to create opportunities, which could help people better their lives and lift them out of poverty.

He said he would liaise with community leaders, entrepreneurs, security services, leaders in peace advocacy, and politicians who were at the forefront of decision making, to prioritize project needs for community members.

He said Rotary Club Kumasi East had supported the Setting-up of a modern digital x-ray machine at Nkwakaw Methodist Hospital in the Eastern Region, a dental nursing training school at Methodist Hospital at Ankaase in the Afigya-Kwabre South District of Ashanti, and the “classroom box” projects for selected schools in the Ashanti region.