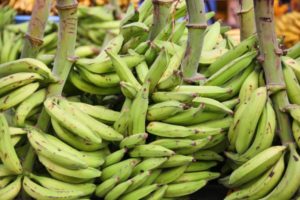 The Asante-Akim North District continues to increase its revenue earnings from the exportation of plantain to neighbouring countries.

Mr Eric Dwomoh, District Director of Agriculture, who announced this said the Planting for Food and Jobs, had boosted plantain production and export in the district.

He was speaking when Mr Collins Augustine Ntim, Deputy Minister for Local Government and Rural Development, paid a working visit to the district.

Mr Dwomoh said the district was on course to play its role as the food basket of the country and called for support from all stakeholders to help farmers increase their yields and income.

Mr Ntim, on his part said the planting for food and jobs, planting for export and rural development, rearing for food and jobs, Ghana productive safety net, modernization of agriculture in Ghana, and other interventions, were geared towards increased food production to ensure food security and adequate supply of raw materials to factories under the one district one factory programme.

He stressed the need for farmers to adopt modern farming practices to ensure sustainable food production in the area.

Mr Ntim commended agricultural extension officers and the district assembly for supporting the government’s initiatives, which were yielding better results for the farmers and the country as a whole.

Mr Francis Oti Boateng, District Chief Executive said about 75 percent of the Cattle herdsmen whose activities were affecting food production, had been evacuated from the district.

He called on the people to support the NPP government in the upcoming elections to enable it continue with its good works.