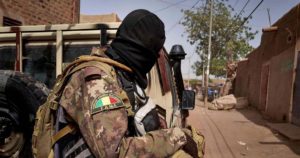 Soldiers leading a military coup against Mali’s President Ibrahim Boubacar Keita, who resigned in the early hours of Wednesday, have announced they will take power on a “transitional” basis.

Colonel-Major Ismael Wague, up until now deputy chief of staff of Mali’s air force, announced on national television the formation of the National Committee for the Salvation of the People (CNSP), which is to lead the West African nation until elections are held.

“We, the patriotic forces grouped together in the CNSP, have decided to take our responsibilities before the people and before history,” Wague told the nation, adding that the CNSP would oversee “a civil political transition” with elections “within a reasonable timeframe.”

A military coup had been necessary because Keita’s government had led Mali into “chaos, anarchy and insecurity,” Wague said.

The CSNP had closed all air and land borders and was implementing a night-time curfew until further notice, Wague said.

The council was willing to collaborate with the UN peacekeeping mission in Mali (MINUSMA), the French operation Barkhane as well as the G5 Sahel – an alliance formed by Burkina Faso, Chad, Mali, Mauritania and Niger – to fight the Islamist threat facing the Sahel.

“All agreements made with national, regional and international partners will be respected,” said Wague.

Wague said the CSNP was also seeking dialogue with separatist and rebel groups inside of Mali.

The announcement comes hours after Keita resigned on live television following a military coup during which soldiers arrested Keita as well as Prime Minister Boubou Cisse.

Keita and Cisse were believed to remain in the soldiers’ custody on Wednesday.

Mali has been struggling to maintain stability since tens of thousands of opposition supporters accused Keita of gross intimidation and vote-buying during a parliamentary election in April, which gave his administration a firm majority.

Several attempts at talks between the government and the opposition failed.

Soldiers started to mutiny early Tuesday in the garrison town of Kati, 15 kilometres north-west of the capital Bamako, and then moved into the capital.

Political instability in Mali is seen as a dangerous development for the entire Sahel region, which already faces ongoing threats from numerous terrorist and separatist groups.